The Ancient World Mapping Center is making available for free download their wall map of Asia Minor. The blog post from yesterday reads:

After several years of preparation, AWMC’s newest wall map is now available online. This map is a successor to that of J.G.C. Anderson (1903) and its partial revision by W.M. Calder and G.E. Bean (1958).  It was displayed in draft at the ‘Roads and Routes in Anatolia’ conference organized by the British Institute at Ankara (March 2014).  It was then revised with a view to being issued with the volume planned to follow that meeting in due course.  Meantime the Center is now making the map available online. 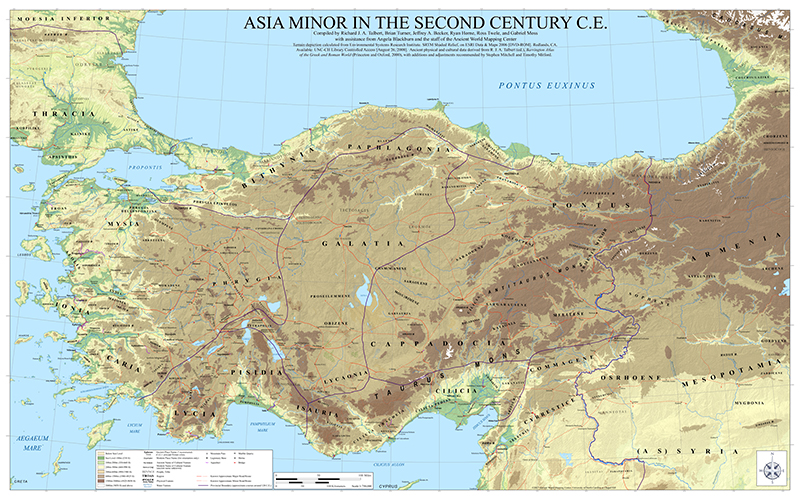 The map is noteworthy because the Ancient World Mapping Center has reconstructed the ancient coastline, most notable at places such as Miletus, Ephesus, north of Smyrna, and between Xanthos and Patara. The map shows Roman roads, bridges, quarries, and aqueducts. It also shows rivers, wetlands, and elevation with subtle hillshading. According to the legend, the map includes mountain passes and shrines, though I noticed only one of each.

There are a few symbols that do not appear in the legend, and I am not entirely sure what they mean: an asterisk before the name Sparza, and these three patterns

Yesterday, I could download the map directly, but as of today you have to email the Ancient World Mapping Center for a download link. The TIF file I downloaded is a whopping 1.72GB! If you were to print the map at 300dpi, the sheet would measure 80″ x 50″. (To download a JPG version of the map at about 100MB, use this temporary link.) The map is licensed under CC-by-4.0.

This map is the latest creation by the Ancient World Mapping Center in a line of cartographic products which includes the Barrington Atlas of the Greek and Roman World (print and digital), Benthos Digital Atlas of Ancient Waters, the AWMC à-la-carte Map, and the Routledge Wall Maps for the Ancient World.