The photographic department of the American Colony was on hand to capture these historic moments. The most famous photo shows the mayor of the city surrendering to the British with a white flag. 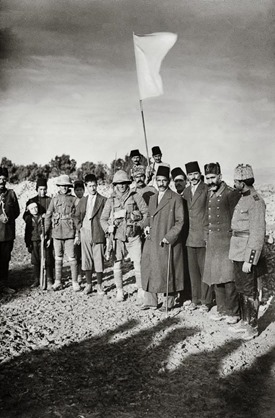 Below is a photograph of the letter of surrender. 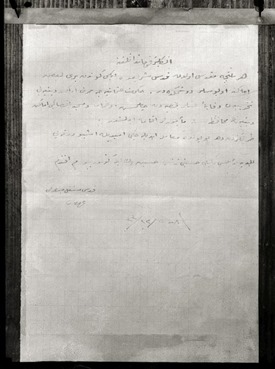 General Allenby was advised to make a contrast of his entrance into Jerusalem with the rather ostentatious ceremony of the German Kaiser Wilhelm II in 1898, and he dismounted his horse to walk through Jaffa Gate into the city. 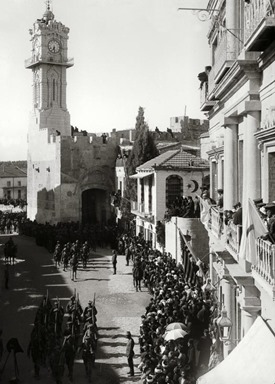 Around the corner stands the entrance to the historic “Citadel of David,” and on its podium Allenby read a proclamation. 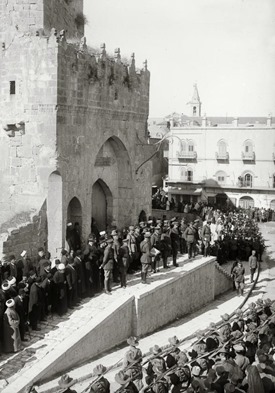 The proclamation was translated into six other languages and posted throughout the city. 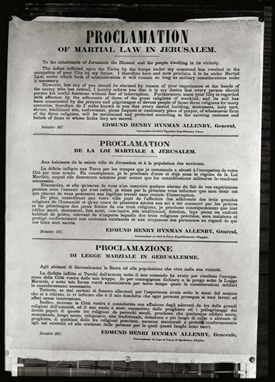 The text of the proclamation, read by Allenby 100 years ago today, is as follows:

To the inhabitants of Jerusalem the Blessed and the people dwelling in the vicinity: The defeat inflicted upon the Turks by the troops under my command has resulted in the occupation of your city by my forces. I therefore here and now proclaim it to be under martial law, under which form of administration it will remain so long as military considerations make it necessary. However, lest anyone of you be alarmed by reason of your experience at the hands of the enemy who has retired, I hereby inform you that it is my desire that every person should pursue his lawful business without fear of interruption.
Furthermore, since your City is regarded with affection by the adherents of three of the great religions of mankind, and its soil has been consecrated by the prayers and pilgrimages of multitudes of devout people of these three religions for many centuries, therefore do I make known to you that every sacred building, monument, holy spot, shrine, traditional site, endowment, pious bequest, or customary place of prayer, of whatsoever form of the three religions, will be maintained and protected according to the existing customs and beliefs of those to whose faith they are sacred.”

Thus Allenby declared that while the city was under martial law (as the Great War continued for another year), he guaranteed the status quo for places of worship.
After the proclamation, Allenby was photographed riding his horse away from Jaffa Gate. 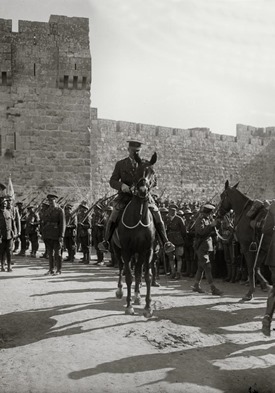 This photograph below was taken on the day of Jerusalem’s surrender and shows five British generals. 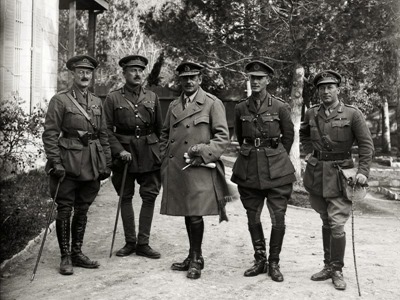 A monument to the surrender was later erected in Romema in west Jerusalem where it still stands until today. 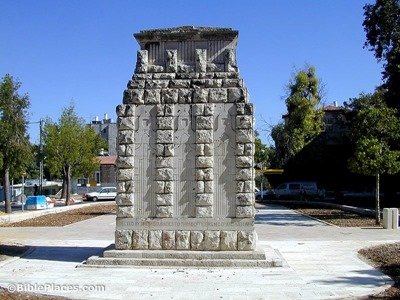 All of the black and white photos above come from the Early 20th-Century History volume of the American Colony and Eric Matson Collection. The complete PowerPoint file of the 1917 Turkish
Surrender is available as a free download.

Picture of the Week: Surrender of Jerusalem, 1917 – a post on this blog by Seth M. Rodriquez