A fragment of an ancient Canaanite deity has been discovered in the temple at Moza, providing some explanation for why high places in Judah were condemned by the biblical writers.

A fortress in the French Hill neighborhood of Jerusalem is being renovated. This fortress is believed to have protected the city during the time of Judah’s kings.

After a $12 million renovation project, a beautiful mosaic is about to open to the public at Hisham’s Palace in Jericho.

The debate continues as to whether Herod’s Galilean temple was located at Caesarea Philippi or at Omrit, and a permanent exhibit including a large column from Omrit is now on display at Tel Hai College.

Eight antiquities thieves digging for buried gold were nabbed in the act.

“Hear, O Israel: The Magic of the Shema” is a new exhibit at the Israel Museum open through April 2022.

The Urim and the Thummim are the subject on the latest episode of the Biblical World podcast, with Doug Bookman joining host Mary Buck to share his research.

Bryan Windle’s top three reports in biblical archaeology this month are all likely to end up in the year’s top 10 list.

This week we released Paul’s Epistles in our Photo Companion to the Bible series. The sale price ends soon.

The Albright Institute is hosting an exhibit entitled “Gateway to the World: Jerusalem Airport 1948-1967” from Oct 28 to Nov 28. Eldad Brin has written an article for the Jerusalem Quarterly with the same title.

The Israel Oriental Studies Annual has been relaunched after a two-decade hiatus.

Mordechai Cogan laments the closing of the Department of Bible at the Ben-Gurion University of the Negev, and especially the manner in which it was done.

“The University of Haifa is establishing the first-of-its-kind School of Archaeology in Israel, which will integrate all archaeological activities and endeavors undertaken by the university—on land and at sea.” It will be headed by Israel Finkelstein.

An antiquities dealer in New York City has confessed to manufacturing thousands of fraudulent antiquities after authorities discovered an assembly-line process in the gallery’s back rooms.

A podcast argues that a 2018 photograph of Kim Kardashian with a 1st century BC Egyptian gold coffin at the NY Metropolitan Museum of Art provided an essential clue toward determining that the coffin was looted and illegally sold.

Zoom lecture on Oct 27: “Old, but Still Topical: The Dispute Between Driver and Sayce on Biblical Archaeology,” by Hugh Williamson.

Author panel webinar on Nov 3, hosted by Eisenbrauns, with Seymour (Sy) Gitin, author of The Road Taken: An Archaeologist’s Journey to the Land of the Bible; Martin Heide and Joris Peters, authors of Camels in the Biblical World; and Larry G. Herr, Douglas R. Clark, and Lawrence T. Geraty, authors of The 2004 Season at Tall al ‘Umayri and Subsequent Studies.

Zoom lecture on Nov 11: “Work and Worth: Women’s Household Activities in Ancient Israel,” by Carol Meyers.

Robert Mullins is interviewed on Patheos about his archaeological work in Israel and his new book, Atlas of the Biblical World.

Ferrell Jenkins writes about his “longest trip,” the 66-year journey with his wife that ended earlier this month.

Do all roads lead to Rome? It’s a little complicated.

ASOR has dozens of digital maps of the ancient world available for free use.

There is controversy over a renovation plan for the Bodrum Museum which would relocate the famous shipwrecks of the Museum of Underwater Archaeology in order to convert the space into a mosque.

The ancient city of Dolichiste was a thriving Lycian trading hub until it was partially submerged in the Byzantine period.

The tombs of gladiators in Ephesus shed light on our knowledge of the ancient warriors.

An Italian archaeologist who has been excavating in Turkey for 30 years is ready to retire.

“During the excavation of the now-famous northwest corner of Rameses III’s fortress from the first half of the 12th century BCE, archaeologists unexpectedly came across two more fortress walls covering each other.”

New exhibit at the Art Museum of the University of Memphis: “Writing in Three Dimensions: Myth and Metaphor in Ancient Egypt,” through November 29.

Personal letters provide insight into the lives of ancient Egyptians.

Archaeologists have made what they are calling a “sensational” new find with the discovery of a skeleton a step away from the sea at Herculaneum.

A Lebanese official has been caught with antiquities looted from Syrian museums in his office.

“Escape to the past and explore true crime in antiquity during a free week-long online experience of the Getty Villa Museum’s annual College Night.”

Leon Mauldin has recently returned from a tour of Greece and Turkey, and he shares photos of Assos and Corinth.

We have more stories this weekend than perhaps ever before for a single week (nearly 50), so expect a third installment of the roundup on Monday.

The first-ever ancient depiction of the balm of Gilead was discovered on an amethyst seal found by volunteers sifting soil from near the Temple Mount. There’s a 3-minute video here.

Excavations at el-Araj (Bethsaida?) have wrapped up for the season, and the archaeologists discovered a large apse and two partial inscriptions in the mosaic floor of what they believe is the Church of the Apostles.

A diver found a Crusader-era sword in perfect condition off the coast of northern Israel. There is a short video here.

Not only the Crusader sword but much more has been discovered because of a once-in-a-century storm that occurred in December 2010.

Archaeologists discovered a hoard of silver coins from the Hasmonean era in Modiin.

Daniel Master is a guest on the Book and the Spade to discuss the recent excavations at Tel Shimron.

An organization is calling on the Israeli government to excavate and open to tourists the site of ancient Gibeah of Saul, more recently home to King Hussein’s unfinished palace.

“Members of the Samaritan faith gathered at sunrise on Wednesday to mark Sukkot, a month after Jews celebrated the festival.” The short story includes a brief video.

NY Times: “Rameh, a Palestinian town [in Galilee] surrounded by olive groves, has long had a reputation for producing especially good oil.”

Megan Sauter writes about the importance of three purple textile fragments from the time of David recently discovered in the Central Timna Valley Project.

The Museum of the Bible is offering virtual tours of Masada and Megiddo on November 10 and 17, “using advanced images combined with an online interactive classroom to create a rich, immersive experience.”

“A new exhibition by the Israel Antiquities Authority at the Yigal Allon Center in Kibbutz Ginossar offers a glimpse of the centuries when Jewish sages managed to rebuild a community in the Galilee.”

Kyle Keimer and Chris McKinny discuss Cabul in the days of Solomon in the latest episode of OnScript’s Biblical World.

When children volunteering at the Temple Mount Sifting Project stole some of the artifacts, the director used the opportunity to instruct them on the community’s responsibility.

On sale for Kindle: A Week in the Fall of Jerusalem, by Ben Witherington ($3.99)

Many finds have been made during the course of excavations required by the Marmaray project, a railway tunnel connecting the Asian and European sides of Istanbul.

Archaeologists excavating at Istanbul’s Haydarpaşa Train Station have made a number of discoveries spanning three millennia.

New stone ram heads have been discovered in Luxor during the restoration of an ancient road.

“Egypt is using an international award it recently won for restoring the Eliyahu Hanavi Synagogue in Alexandria to promote tourism.”

“Slaves were primarily for credit, not for labor,” write Ella Karev and Seth Richardson in a piece entitled “Rethinking Slavery in the Ancient Near East.”

The Oxford School of Rare Jewish Languages is offering free courses in 12 Jewish languages, including Yiddish, Ladino, and Judeo-Arabic.

A 12-minute video of the British Institute of Persian Studies’s contribution to Iranian archaeology of the 1960s and 1970s was recently screened at the Institute’s 60th anniversary and is now online.

A trailer is online advertising a documentary about Susa that will be available on BBC Select.

“The 7 Churches of Revelation: Times of Fire” will be a “virtual cinema event” beginning on October 26.

The Amarna Letters are the subject of the latest podcast episode on the Biblical World, with Mary Buck and Chris McKinny.

“A huge complex of 1,500-year-old winepresses capable of producing some two million liters of wine a year has been uncovered by archaeologists in the city of Yavne, south of Tel Aviv.”

Margreet L. Steiner looks at the elusive Persian archaeological evidence in Jerusalem in order to determine what the city was like when the Jews returned from exile.

Makhtesh Ramon in southern Israel is home to a crew simulating a colony on Mars.

Zoom lecture on October 20: “The City of Babylon from c. 2000 BC to AD 116,” by Stephanie Dalley. Her book on this subject was released earlier this year.

Zoom lecture on November 4: “Under Jerusalem: The Buried History of the World’s Most Contested City,” by Andrew Lawler, author of a forthcoming book with the same title.

The Florence Scroll, a 14th-century parchment depicting holy sites from Egypt to Lebanon, is now on display in the Israel Museum as part of the “Painting a Pilgrimage” exhibit.

Weekend Sale: Cultural Images of the Holy Land – only $20 with coupon HARVEST 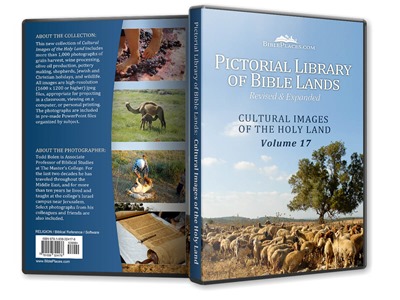