Archaeologists discovered an intact burial cave from the 13th century BC on the Palmachim Beach south of Tel Aviv. Unfortunately the cave was plundered while it was being excavated.

Scientists have identified the earliest use of opium in a 14th century BC burial pit at Tel Yehud.

Here are many more photos of the beautiful Byzantine mosaic floor discovered in the Gaza Strip.

“An ancient shipwreck found off the shore of Israel and loaded with cargo from all over the Mediterranean shows that traders from the West still came to port even after the Islamic conquest of the Holy Land.”

Rocco Buttliere built a model of Jerusalem in the 1st century using 114,000 Legos.

“Five perfectly red heifers, required for the ritual purification of those who have touched a dead body, arrived in Israel from a ranch in Texas on Thursday, as the Temple Institute continues preparations to lay the ground for the construction of the Third Temple in Jerusalem.” There is hope that they will produce a herd that will be a tourist attraction for Christians.

Bryan Windle has written an archaeological biography for King Pekah, one of the last kings of Israel.

I had what may be a unique experience in my life this week – three articles I wrote were published within a few days of each other. Rather than pass over them briefly here, I’ll plan to say more in separate posts in the next few weeks.

Hundreds of hieroglyphics have been discovered in a tunnel in Hattusa. There are more photos in these articles in the Turkish press.

“Zahi Hawass recently said that he is certain that a mummy he is currently studying will turn out to be that of Queen Nefertiti.”

The arrest of three antiquities thieves near ancient Memphis resulted in the discovery of ancient tunnels leading to two New Kingdom rooms engraved with hieroglyphics.

Egyptian archaeologists are seeking to have the role of Egyptians recognized in the discovery of King Tut’s tomb and the deciphering of the Rosetta Stone.

All of the artifacts from King Tut’s tomb will be displayed in the Grand Egyptian Museum, expected to open in November.

Leon Mauldin notes the 200th anniversary of the decipherment of the Rosetta Stone that occurred a few days ago.

Egypt has passed a new law imposing penalties on those entering archaeological sites or climbing antiquities without a permit.

Djémila in Algeria has some of the best preserved ruins from the Roman empire.

Sites in Iraq are opening to tourists after destruction by IS forces.

Discover Magazine reviews our lack of knowledge about the hanging gardens of Babylon.

Opinion piece: “Some US museums will overlook the dubious origins of acquisitions if it suits their purposes.” The focus is on a group of statuary discovered in southwestern Turkey in 1967.

Five ancient sundials have been discovered in Jordan, and a professor is seeking to raise awareness of their use in antiquity. The professor who authored a study on it believes that the situation would be improved with the establishment of a dedicated astronomy museum.

Bryan Murawski offers four tips for preaching geography-heavy texts. (Anybody else suspect that he has never heard of the Photo Companion to the Bible?)

The Babylon Bee reports that archaeologists have found the red pens used to write the words of Christ in the New Testament.

What scholars once believed was an ancient synagogue near Khirbet Midras is actually a Roman temple. Haaretz has the story for subscribers.

A silver quarter-shekel from Year 4 of the First Jewish Revolt that was looted from the Elah Valley has now been returned to Israel. The coin is so rare that there are none in any of Israel’s museums.

With the announcement pending of the most beautiful mosaic floor ever discovered in the Gaza Strip, scholars are calling for greater protection of the area’s antiquities.

Bible History Daily’s latest OnSite video is of the Herodium. Nathan Steinmeyer has packed a lot of information and images into just over two minutes.

Chandler Collins has posted the first “Jerusalem Tracker,” with links to recent articles, books, lectures, and developments related to Jerusalem. This is like a roundup on steroids, all focused on one important city. (You can support his work here.)

The Museum of the Bible and DIVE (Digital Interactive Virtual Experiences) are hosting a virtual tour of Masada on October 19. Registration costs $20.

A new exhibition entitled “Arteology: The Power of the Ancients in Contemporary Forms” has opened near the Davidson Center in Jerusalem.

Martin Heide and Joris Peters write about “Camels in the Biblical World of the Ancient Near East.” Their evidence for their use over the millennia observes the use of domesticated camels in the time of Abraham.

In the latest episode of BiblicalWorld, “Chris McKinny and Mark Janzen discuss the early vs. late date for the date of the exodus, date of the conquest, the emergence of Israel in the land of Canaan, settlement patterns in Canaan, and biblical chronology.”

“The Kerem Tunnel, the first bicycle tunnel in Israel, has been inaugurated as part of the Jerusalem Ring Path, a 42-kilometer cycling route that surrounds the capital city.”

If you do not receive our newsletter—or if yours landed somewhere other than your inbox—this is a quick note that our new photo collections are available for Hebrews, James, 1 & 2 Peter, 1, 2, & 3 John, and Jude.

These four volumes are available this week for only $49 (all together, including immediate download and free shipping).

Check out the newsletter for more details and the order links. If you know someone—pastor, Bible teacher, Christian school leader, etc.—who spends time studying or teaching these books, please share this with them. Thank you. 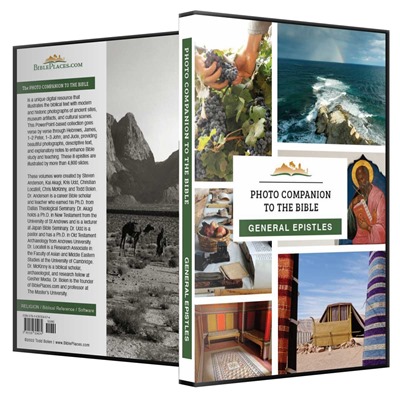 Major progress has been made in the project to recreate a harbor for ancient Ephesus.

Turkish Archaeological News reports on the top stories for the month of August. One discovery noted is the excavation of a Roman fountain at Assos.

“An ongoing excavation in the ancient Greek city of Metropolis has led to the discovery of 150 amphorae and water jugs found in a well believed to be from approximately 1,800 years ago.”

New excavations have begun at Ostia, the ancient port city of Rome.

A large Roman mosaic of Medusa that had been kept in a basement in Los Angeles was recovered by the FBI and returned to Italy.

“Researchers found that upper-class people in the Roman Empire did not always follow the law regarding funeral parties, often opting for everyday foods rather than expensive specialties, according to a new study.”

Mark Wilson discusses the concept of “treasure in jars of clay” in light of the discovery of coin hoards discovered in the ancient world. (I usually don’t link to Bible History Daily reposts, but this one is interesting and I don’t remember it from before.)

Some recent episodes on Digging for Truth TV:

New research confirms that a lost branch of the Nile River played a significant role in the construction of Giza’s pyramids.

“Egypt is celebrating the bicentenary of the decipherment of ancient Egyptian hieroglyphs and the creation of Egyptology with a batch of new events and a social media campaign.”

The exhibition “Ramses the Great and the Gold of the Pharaohs” is now on display at the de Young Museum in San Francisco.

An Italian team is set to return to excavations at Ebla, 12 years after war in Syria halted 47 years of uninterrupted digging. Though the archaeological site was not bombed, the ruins were seriously damaged by tunnels, trenches, and pillboxes. The Syrians for Heritage, however, are opposed to the University of Rome La Sapienza’s resumption of excavations at Ebla and Tell Ferzat. Ferrell Jenkins posts a couple photos from his visit to Ebla 20 years ago.

Archaeologists have identified more than 350 “kites” in northern Saudi Arabia and southern Iraq.

The scholars who deciphered Linear Elamite explain how they did it.

A new archaeological museum has opened in Isfahan, Iran.

The Bible Mapper Blog continues to create and share free maps each week:

I’ll have more stories in part three of this weekend’s roundup tomorrow.