Coronavirus fears have led to a number of restrictions in Israel and the West Bank, including the closure of the Church of Nativity in Bethlehem, the banning of all foreign tourists from hotels in the West Bank, and the quarantining of travelers arriving from certain European countries. Now Israel is talking about forbidding entrance to Americans.

The Step Pyramid, Egypt’s oldest, is open again to tourists after a long renovation. As of this writing, the homepage of ArtDaily has a number of photos from the interior (or here).

A new geochemistry analysis indicates that the “Nazareth Inscription” apparently came from the island of Kos, and not from Nazareth. The underlying study is here.

New technology is being used to determine the date and location of horse domestication in the ancient world.

The latest newsletter of the Oriental Institute is now online.

An exhibit on Tall Zirā‘a will run at the Museum of the Yarmouk University through the end of June.

King Omri is the latest subject of the archaeological biography series by Bryan Windle. In that, he links to a website for renewed excavations of Tirzah (Tell el-Farah North) that I was unaware of.

Ray Vander Laan is leading a free web-based video course beginning Monday on “The Path to the Cross.”

Carl Rasmussen visits the new museum at Troy and shares a photo of a human sacrifice depicted on a sarcophagus.

The Greek City Times has a feature on Nashville’s replica of the Parthenon.

A call for papers for two sessions at SBL on the “Historical Geography of the Biblical World” ends on Wednesday.

New from Brill: The City Gate in Ancient Israel and Her Neighbors: The Form, Function, and Symbolism of the Civic Forum in the Southern Levant, by Daniel A. Frese. 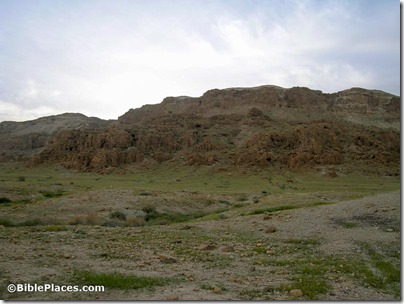 The stories this week are about as random as I can remember, making it challenging to figure out a logical sequence. We’ll start with Jerusalem, and we’ll end with a photo that was popular this week on our Facebook/Twitter/Instagram stream.

Journalists were given a tour of the newly reopened Roman square underneath the Damascus Gate of Jerusalem.

With the water level up nearly 6 feet in the last month, Israeli authorities may have to open the dam of the Sea of Galilee for the first time since 1992. (There’s a beautiful sunrise photo at the end of this article.)

Nof Ginnosar and the Sea of Galilee are the focus of the latest in the “Life Lessons from Israel” video series.

“Russian Archaeology in the Holy Land,” by Yana Tchekhanovets and Leonid Belyaev, is the lead article in the latest issue of ANE Today.

Biblical Byways is offering a low-budget study tour of Israel for Spanish speakers in September.

A replica of a 2,600-year-old Phoenician ship finished its five-month transatlantic voyage last week when it arrived in Miami.

Archaeologists have recovered 1,400 cuneiform tablets from the lost Sumerian city of Irisagrig, but they don’t know where that ancient city was located.

The traditional tomb of Ezekiel (in Iraq, not the one in Iran) is again becoming a place of pilgrimage.

For more than a decade now, “Athens-based photographer and animator Dimitris Tsalkanis has cultivated a sort of unusual hobby: recreating ancient Athens via 3D modeling software.”

An archaeologist in Spain is on trial for forging a third-century depiction of Jesus’s crucifixion.

Salman Abu Sitta will be lecturing in London on February 28 on the subject of the “1871 Survey of Western Palestine Revisited: The Visible and The Hidden.”

New book: Roman-Period and Byzantine Nazareth and Its Hinterland, by Ken Dark

Cynthia Shafer-Elliott talks about her recent book Food in Ancient Judah on the OnScript podcast.

The archaeological biography on King Ahaz features an altar, a seal, and a toilet. 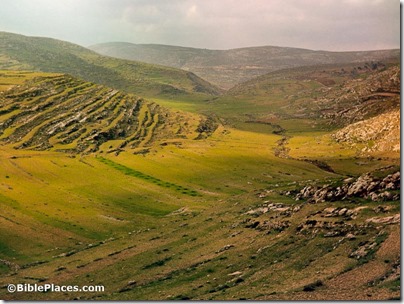 This beautiful valley is located in the tribal inheritance of Ephraim, not far from Shiloh. Photo taken in 1966 by David Bivin.

Note: this blog moved to a new location a few days ago. The old address should forward to the new, but you can update your bookmark to https://www.bibleplaces.com/blog/. Email subscriptions should not be affected, but those using a feed reader will need to update to the new address.

Archaeologists have published a report that they have discovered a “massive Iron II temple complex” at Moza, in use from 900 to 600 BC.

An Egyptian anchor discovered off the coast near Haifa is now on display at the Israel Museum. The impressive artifact features hieroglyphics and images.

Excavations at Tel Tsaf in the Jordan Valley have uncovered homes and food silos made of mudbrick and preserved since the Neolithic period.

“Archaeologists on Thursday unveiled 16 ancient Egyptian tombs filled with sarcophagi and other artifacts from a vast burial ground” near Minya in central Egypt.

Israeli researchers have successfully grown six trees from seeds discovered at the sites of Masada, Qumran, and Wadi Makkuk. The seeds date to the 4th century BC to the 2nd century AD, and like their predecessor Methuselah, they have been given biblical names. Photos here.

Shlomit Bechar argues that the Hazor complexes with standing stones were part of a “ruin cult.”

A professor has found a technique to solve quadratic equations that the ancient Babylonians used.

Laerke Recht takes a look at human sacrifices in the ancient Near East.

War has devastated a museum in Maaret al-Numa, Syria known for its Roman and Byzantine-era mosaics.

A terrorist near St. Anne’s Church fired shots toward the Temple Mount, wounding a policeman.

USA Today is having a contest for the Best Religious Museum in the USA. Nominees include the Museum of the Bible, the Ark Encounter, and the Biblical History Center.

The latest video in the “Life Lessons from Israel” is a 6-minute devotional video on Megiddo.

Upcoming events at the Albright Institute include a lecture by Israel Finkelstein on the excavations at Kiriath Jearim.

After renovations to steps and railings, the Ramparts Walk from the Damascus Gate to the Lions Gate of the Old City of Jerusalem has re-opened.

The Mausoleum of Augustus in Rome is set to reopen this spring after being closed for 80 years.

Passages, a Christian version of Birthright Israel, is on track to bring 10,000 students to Israel by the end of this year.

A DNA analysis of the York Gospels was done using DNA extracted by using erasers.

Emily Master of The Friends of Israel Antiquities Authority is the featured guest on The Book and the Spade.

Available for pre-order: The Koren Tanakh of the Land of Israel: Exodus. There are early reviews here and here.

Shmuel Browns shares his favorite photos of the year and gives his readers a chance to vote on their favorite.

The Tel Moza website gives details for joining the spring excavation as well as background about recent discoveries.

A family volunteering at an excavation in Lower Galilee discovered remains of an iron industry from the 6th century AD.
Some of the latest discoveries from Shiloh are described in a somewhat disjointed article in the Jerusalem Post.
The “Tomb of the Kings” in Jerusalem has been reopened to visitors (again) by France, which owns the site. Access is allowed only to the outer courtyard.

Naama Sukenik explains how new technology is being used to provide insights into counterfeiting dyes in the ancient textile industry.
Mark Barnes looks at the significance of the Mount of Olives in the Bible, including some interesting comparisons and contrasts between David’s and Jesus’s time there.
Who is Gallio and why is he so important to New Testament history? Bryan Windle explains in a well-illustrated article.

The “world’s oldest natural pearl” has been discovered in excavations on an island near Abu Dhabi.

“Life at the Dead Sea” is a new exhibit about the cultural history of the lowest place on the planet that recently opened at the State Museum of Archaeology Chemnitz.

An exhibit of Egypt’s southern neighbor, “Ancient Nubia Now,” is on display until January 2020 at the Museum of Fine Arts in Boston.

Sculptures from the Torlonia Collection will go on public display for the first time ever at the Capitoline Museums in Rome beginning in March.
The Washington Pentateuch is going on display at the Museum of the Bible.
The archaeological museum in Basra is adding English labels in hopes of welcoming more international visitors.
Jaafar Jotheri provides an overview of excavations in Iraq in the last year.
A conference will be held at the Louvre on November 25 on Tappeh Sialk: A Key Site for the Archaeology of Iran.
Farrell Monaco will be lecturing on “Dining with the Romans” at the Walters Art Museum on November 10.
4,500 tourists watched the sun illuminate the face of Ramses II in the temple of Abu Simbel.
Wayne Stiles is leading a tour of Israel (and pre-tour to Egypt) in October 2020.
There will be no roundup next weekend.
HT: Ted Weis, Mike Harney, Joseph Lauer, Keith Keyser
Share:
Leave a comment
Search
About the BiblePlaces Blog