The William G. Dever Archaeological Fellowship for Biblical Scholars is a travel-study award for “a qualified American untenured faculty member in the field of biblical studies who wants to acquire elementary, first-hand experience in field archaeology and research in Israel.”

Wayne Stiles explains how Kadesh Barnea helps us to know God’s will.

The original volumes of the Tell en-Nasbeh (biblical Mizpah) excavation reports are now available online for the first time. The Bade Museum website includes a couple of other downloads that may be of interest.

And now published by Gorgias Press: “As for me, I will dwell at Mizpah …”: The Tell en-Nasbeh Excavations after 85 Years, edited by Jeffrey R. Zorn & Aaron J. Brody.

The Yale Babylonian Collection now has its own website.

The authenticity of two Baruch son of Neriah bullae is rejected in a new article by Yuval Goren and
Eran Arie in BASOR vol. 372 (December 2014), pp. 147-158. (Abstract and article on JStor. And there’s free access to the entire issue via the BASOR website.)

“Patterns of Evidence: Exodus,” claims to solve the problem of lack of evidence, but it appears to do so by a major chronological revision. As far as I’m concerned, a movie showing on only one night (Jan 19, 7pm) in selected theaters doesn’t deserve much attention.

A full-scale sailing replica of the Ma‘agan Michael is now under construction. The original ship wrecked near Dor in 400 BC and was discovered in 1985.

Both portions of P46 have now been digitized and are available online.

Kevin Shillington has begun a series on Charles Warren on the Palestine Exploration Fund Blog. 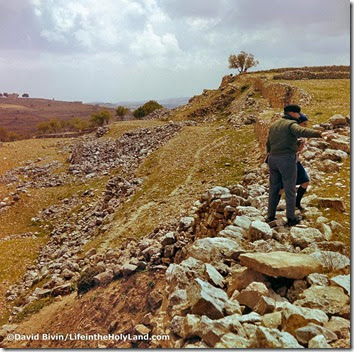 Modern Place Names and the Bible

A family member asked me for a brief list of major regions in the biblical world that are mentioned in the news today by other names. Since most Bible dictionaries do not have entries for the modern names, this list is intended to bridge that gap. With the ancient names in hand, you can consult a Bible dictionary for more details.


Iran – ancient Persia. Setting of familiar stories of Daniel in the lions’ den and Esther.


Syria – ancient Aram. Rarely united in ancient times, leading to multiple Aramean countries. The prominent one in the Bible was centered in Damascus.


Lebanon – home of the biblical cities of Tyre and Sidon and the ancient Phoenicians.


Jordan – settled in biblical times, from north to south, by Israel (tribes of Manasseh, Reuben, and Gad), Ammon, Moab, and Edom.


West Bank – the modern name for the biblical lands of Judah (Judea), Ephraim, and Manasseh (Samaria). Strangely enough, the Israelis today do not live in most of the land that was the heartland of ancient Israel.


Gaza Strip – once was part of the land of the Philistines (no relation to the Palestinians of today except in name). Most of the Philistine territory is inhabited by Jewish Israelis today, including the coastal cities of Ashdod and Ashkelon.


Golan Heights – biblical Bashan. Known for its cattle and oaks, but sparsely settled in the biblical period.


Turkey – in the Old Testament period this was home to a variety of people that are less directly related to the Bible (including the Hittites). In the New Testament times, Paul founded and worked with many churches, including those in Galatia, Ephesus, and Colossae.


Russia – this region is never named in the Bible. Some believe that references to the enemy in “the north” pertain to Russia, but I think this is unlikely. Because Israel was sandwiched between the Mediterranean Sea to the west and the Arabian desert to the east, invaders came from the south (Egypt) or the north (Assyria and Babylon).

Classroom learning is valuable, but experience in the field is essential for students aspiring to careers in archaeology and

ancient Near Eastern history. The costs for even a short summer excavation can be prohibitive for many students, and thus ASOR is sponsoring March Fellowship Madness in an effort to raise $10,000. This is a great opportunity to help needy students in a worthy effort. ASOR has pledged that 100% of all gifts will go directly to the scholarships, and if the goals of 100 donors and $10,000 are met, an additional $5,000 will be donated.

You can read all of the details and donate at the ASOR site. If half of this blog’s readers donated $25 each, they would more than double their goal today and 30 students would receive scholarships.

My Recent Trip to Israel

Until last month, every tour that I had led in Israel was of a student group under the auspices of an educational institution. For that reason, I could never reply with personal experience to inquiries about which travel agent to use, which tour guide to hire, or similar questions. Several weeks ago I returned from a two-week tour with a group of 45 from my church in the Dallas area. The trip went very well and I thought I might share about some of those who made the trip successful.

For arranging our group flight, we used Shirley Fleig of Group Advantage. Shirley has arranged group travel for The Master’s College ever since I first traveled to Israel in 1990. She has always done an outstanding job and this time was no different. (Note: Group Advantage arranges travel for groups only.)

Several friends recommended I contact Yoni Gerrish of Jerusalem Cornerstone Foundation to be our land agent. Yoni is a licensed tour guide who has some similar educational background to me. I appreciated his flexibility and excellent prices. I could not ask for anything more than he provided.

I did all of the teaching but for legal purposes we had a licensed Israeli guide traveling with us. Since this was a new experience for me, I had some concerns, but Yehuda Zabari was a perfect partner for the trip and I would happily work with him again.

What would I consider to be the most important places for a two-week study tour of Israel for a physically fit and mentally prepared church group? My schedule answers that question.

I might close by noting that the above does not mean that there are not other excellent agents and guides. I know that there are! But I thought it might be helpful to share my experience for those interested in knowing some of the options. 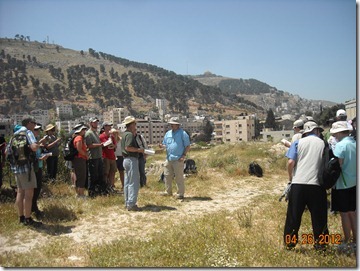 A number of articles or blog pieces have appeared recently about various sites and trails around Israel.

Shmuel Browns recently completed an eight-day hike on the Israel Trail, beginning at its southern end near Eilat.  He posts some reflections and photos from his experience.  The last picture in particular should get some of you to thinking about when you’re going to book your next flight to Israel. Browns also recommends a hike from the Timna Valley where one can see many plants in bloom this time of year.

Yoni Cohen writes in the Jerusalem Post about hiking in the Yehudia Forest Reserve, though the article is too brief.  The National Parks official website has similar information, and I noted previously (with links) that this is the best place to hike in the summer.  Last week Cohen wrote about Ein Akev and Ein Zik near Kibbutz Sede Boqer.

Ferrell Jenkins has written about two of the lesser known sources of the Jordan River, the Nahal Senir (Hasbani) and the Nahal Iyon (Bareighit).  He also recently pointed readers to his free guide to biblically related artifacts in the British Museum.

Carl Rasmussen has begun a blog and his most recent post features several beautiful photos of a synagogue mosaic at Sepphoris.

In a new column at the Jerusalem Post, Wayne Stiles writes of Tel Dan and Qumran.  On his blog, Stiles notes the release of a DVD four years in the making entitled “Experience the Land and the Book.”

I stumbled across this photo recently and thought that some of my readers might find this map of the Wadi Qilt (Nahal Perat) environs to be helpful.  This is a great area for hiking, but I’d avoid it in the hottest part of summer. 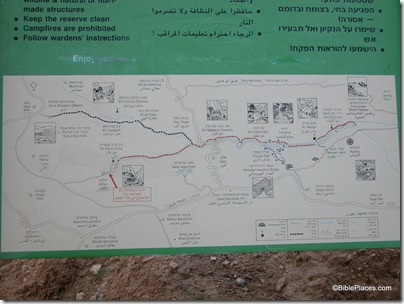 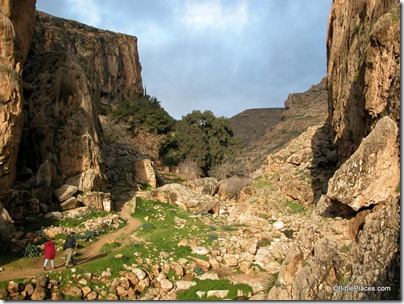