ISIS has destroyed the Arch of Triumph in Palmyra.

The destruction of ancient monuments will now be considered a war crime in trials at The Hague.

An interdisciplinary team of scientists want to dig beneath the popular version of Pompeii to discover what life was really like.

Here’s more on the new lines discovered from the Gilgamesh Epic.

“Persepolis: Images of an Empire” is a special exhibit that opens next week at the Oriental Institute Museum.

The Jewish Chronicle catches up with Ron Tappy four years after he concluded excavations at Tel Zayit.

Howard R. Feldman shares a personal recollection about the Jehoash Affair on the ASOR Blog.

The Amphipolis tomb may have been the funeral shrine for Hephaestion, the closest friend of
Alexander the Great.

The Oxford Archaeology Image Database currently has 700 photos from nearly 30 sites in Iraq and it is seeking more contributions.

The first rainfall this season in Israel led to flash flood warnings in the Judean wilderness.

Netanyahu has suspended approval for the building of a museum in the Western Wall plaza.

Was the star of Bethlehem a comet? A new book makes a strong case.

A German team will repair a botched epoxy job on King Tut’s beard.

Leen Ritmeyer takes the New York Times to task for shoddy research on the Temple Mount.

Rachel Hallotte has dug up some interesting items from the attic of the Albright Institute.

A full schedule of speakers and topics for the Annual Bible and Archaeology Fest is now online. Eric Cline is the plenary speaker.

After the heat wave and brutal sandstorm, Israel this past week experienced lightning, hail, and flash floods. This is not typical September weather.


Near Eastern Archaeology‘s latest issue is devoted to “The Cultural Heritage Crisis in the Middle East.” It is available online for free to all.

A new book: Distant Views of the Holy Land, by Felicity Cobbing and David Jacobson. 330 pages, 350 illustrations, $200. A free sample is available here.

This Wednesday, Sept 23, Brent Strawn of Emory University will give a lecture at Trinity Evangelical
Divinity School entitled “The Historical Psalms, Iconographically Considered.” The event will take place at 7:00 pm on Trinity’s campus, Hinkson Hall in Rodine Building. The lecture is free and open to the public.

Clashes on the Temple Mount have caused damage to Al Aqsa Mosque.

Aren Maeir is on the Book and the Spade talking about his excavations of Gath and the discovery of a large gate this season (part 1, part 2).

From ASOR: Can you pass this Sea of Galilee quiz?

The latest issue of Popular Archaeology includes articles on Gath and Magdala.

Ferrell Jenkins explains the significance of Mahanaim (mentioned 13x in the OT) and shares some photos. 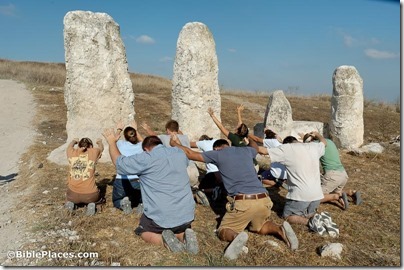 The Holy Fire ceremony was celebrated in the Church of the Holy Sepulcher today.

It snowed on Mount Hermon this morning. The annual precipitation in Israel this year is close to average.

Hershel Shanks is a guest on The Book and the Spade talking with Gordon Govier about 40 years of publishing Biblical Archaeology Review.

Leen Ritmeyer is interviewed on the Voice of Israel about his involvement in the archaeology of Jerusalem and the Temple Mount.

The Mujib Biosphere Reserve (biblical Nahal Arnon) is open for another adventure season.

Wayne Stiles provides a spiritual lesson from the skeleton that today stands on ancient Gibeah.

New Bible atlas: The Historical and Geographical Maps of Israel and Surrounding Territories, by
Arnold G. Fruchtenbaum, with $10 off the $89 price through April 30.

We’re sharing our favorite 12 sites in Galilee on Facebook and @BiblePlaces. 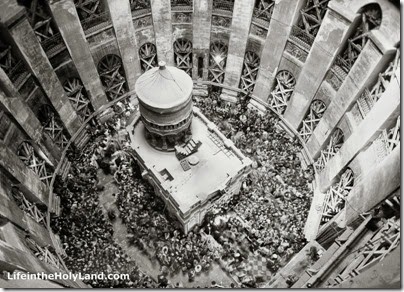 The Holy Fire ceremony in the Church of the Holy Sepulcher
Photo from The American Colony Collection, ca. 1941
Share:
Leave a comment

The largest treasure of gold coins ever found in Israel was recently discovered in the harbor of Caesarea. Most of the coins date to the Fatimid period (ca. AD 1000). There’s a close-up of a well-preserved coin here. Seven high-res images are available here.

The Jerusalem Post has photos and a video of the recent snowfall in Israel. Record snowfall was recorded in Istanbul, and the snow was heavy in Lebanon and Jordan. Yahoo has more photos of Jerusalem here. And Shmuel Browns has some photos from his neighborhood in the German Colony.
Leen Ritmeyer suggests that some paving stones on the Temple Mount pre-date the Roman destruction.

The next stop for the Passages exhibit is the happy town of Santa Clarita, California.

Some of the Dead Sea Scrolls are coming to the California Science Center next month, along with the Jerusalem IMAX movie.

James Pritchard’s HarperCollins Atlas of Bible History is not the best atlas out there, but it’s currently only $3.99 for Kindle. As one reviewer notes, the text may be more useful on the screen than the maps.

This week on the Book and the Spade: Herod’s palaces and ancient olive oil, with Clyde Billington.

Eric Cline will be lecturing at the Oriental Institute in Chicago next week.

Gabriel Barkay, Zachi Dvira, and others involved in the Temple Mount Sifting Operation are coming on a fundraising tour in April and May. Check out their blog to learn how you can arrange talks or dinners with them.

The Islamic State is reportedly looting ancient sites “on an industrial scale.” Some people are trying to stop it.

A new “Rosetta Stone” has been discovered near Alexandria, with the text written in hieroglyphics and demotic script.

One hundred prehistoric cultic sites have been studied in the Eilat Mountains. The academic article on which the news story is based is available on academia.edu. And there are more photos here.

Roman-period mosaics have been discovered in an illicit excavation near Kerkenes, Turkey.

An unlooted Mycenean tomb has been excavated in central Greece from about 1200 BC.

The air pollution (aka “dust”) in Israel and the Middle East was extremely high this past week. Daily
Mail has some amazing photos and Exploring Bible Lands cites a relevant verse. Carl Rasmussen explains the positive effect.

The dust storm was followed by a snow/rain storm (with video). This storm exposed a large Byzantine storage jar on the beach of Yavne-Yam (with photo).

Since you’re reading this, you’re already familiar with one of the 5 Holy Land Blogs You Should Follow, by Wayne Stiles, but you may not be aware of all of the other ones.

Ferrell Jenkins is taking a closer look at Herod’s temples, beginning with the one at Caesarea Philippi (or better, Omrit?) and continuing with Caesarea on the Sea. Both posts are well illustrated.


The New York Times reports on questions about the origins of tablets from the Jewish exiles in Babylon now on display in Jerusalem.

An article in The Jewish Week describes some of what George Blumenthal has done to bring the world of biblical archaeology closer to all of us.

Which popular movies were filmed in Israel? Which ones were not? Those in the former category include “Exodus” and “Schindler’s List.” A longer list is available in this premium article at Haaretz.

Flames of Rome, by Paul L. Maier, is on sale for Kindle now for $1.99. This covers the period after Pontius Pilate and is also recommended if you like historical fiction from biblical times.