A representative of Logos Research Systems has contacted me with a note about their Pre-Publication offer for the Near East Archaeology Collection (3 volumes).  The retail price for the set is $430, but they are offering it now for $100.  The three volumes are: 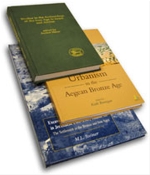 Studies in the Archaeology of the Iron Age in Israel and Jordan, edited by Amihai Mazar (2001).


Urbanism in the Aegean Bronze Age, by Keith Branigan (2002).


Excavations by Kathleen M. Kenyon in Jerusalem 1961-1967, Volume III:
The Settlement in the Bronze and Iron Ages, by Margreet Steiner (2001).

I was initially reluctant to mention it here because I feel that these are not foundational archaeological works, which most of this blog’s readers probably would be better suited for.  In fact, these books are all quite advanced and I would only recommend them for the scholar, graduate student, or a real nerdy armchair archaeologist.  For me personally, the first volume is the most valuable.  This alone is $150 new at Amazon.  Logos software, of course, offers significant advantages for an electronic edition.

I’d love to see Logos offer in the future some more foundational archaeological works, such as:

Mazar, Archaeology of the Land of the Bible

Stern, Archaeology of the Land of the Bible, vol 2

Hoerth, Archaeology and the OT

McRay, Archaeology and the NT

And I would get real excited if they could get the archaeological encyclopedia sets:

The New Encyclopedia of Archaeological Excavations in the Holy Land, 4 volumes

The Oxford Encyclopedia of Archaeology in the Near East, 5 volumes

I fear that most/all of these will never happen because publishers tend to be difficult to work with.  It
seems to me that publishing an electronic edition several years after the initial publication is a win-
win situation.