At the beginning of this year, Hershel Shanks of the Biblical Archaeology Society sponsored a conference in Jerusalem on the matter of recent alleged forgeries. This was a private, by-invitation-only meeting for scholars to speak freely on very controversial matters. I knew about it but expected to never see anything about it, because of the subject’s sensitivity. But Shanks has just released a very detailed report from the conference that is, in my opinion, absolutely fascinating. The subject is of interest to me because

1) everyone loves a good cat fight;

2) some of the challenged inscriptions have biblical relevance;

3) you learn about a lot of other things in the process;

4) the way in which the IAA handled the issue was deplorable;

5) the most vocal on this subject have been the nay-sayers. Thus some have declared that “everyone” thinks all of the questioned artifacts are fakes. I don’t personally care if any or all are fakes; they don’t change my view of the Bible or archaeology. But I have been disturbed by those who claim to know scholarly opinion but who do not. This record gives a more balanced perspective, showing where there is broad agreement (James Ossuary inscription is authentic) and where there is not (Jehoash Inscription).

You can get this report for free, and I consider this a nice present from BAS, which went to no small expense to hold the proceeding and then to compile the report. You have to submit your email address in order to get the link, but you can always unsubscribe to the newsletter later. There are three separate items available.

1. The Report: This 30-page document gives the background of the conference, including who came, who wanted to, and who didn’t respond. Then five inscriptions are reviewed, with relevant comments from the attending scholars.

2. The Report’s Appendix: At 84 pages, this work primarily consists of abstracts by conference participants (plus a few who couldn’t make it). Another section looks at a photo 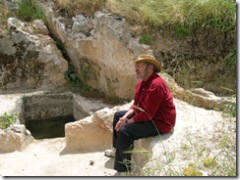 of the alleged forger (Oded Golan) from the 1970s which shows the inscribed ossuary in his home.

3. A 30-minute talk by Gabriel Barkay on ten points scholars should agree on. This is also available in printed form at the end of the Appendix. The mp3 file does not require registration.

This isn’t the final word on the subject, but it’s certainly a step in the right direction. There are many good nuggets in the report, but since the report is free and time is short, I’ll let you discover them for yourself. Perhaps some other bloggers will discuss the report at greater length.