This could be a very important discovery (or it could not), but I doubt we will ever know.  First the story from a couple of sources and then a few comments of my own.

Remains of the Jewish second temple may have been found during work to lay pipes at the Al-Aqsa mosque compound in east Jerusalem, Israeli television reported Thursday.
Israeli television broadcast footage of a mechanical digger at the site which Israeli archaeologists visited on Thursday.
Gaby Barkai, an archaeologist from Bar Ilan University, urged the Israeli government to stop the pipework after the discovery of what he said is “a massive seven metre-long wall.”
Television said the pipework carried out by the office of Muslim religious affairs, or Waqf, is about 1.5 metres deep and about 100 metres long.

Top Israeli archaeologists held an emergency press conference on Thursday, warning that a Second Temple courtyard wall is in danger of being destroyed by the Arab excavations there….
Dr. Gavriel Barkai opened by saying, “A month and a half ago, the Muslim Waqf [religious trust] began digging a trench more than 400 meters [1,300 feet] long – the largest such work ever carried out on the Temple Mount… These are criminal acts that have no place in a cultured country.”
“Some man-worked stones have been found in the trench, as well as remnants of a wall that according to all our estimations, are from a structure in one of the outer courtyards in the Holy Temple.  Such important work is being done without the supervision of the Antiquities Authority.”
“The archaeological damage is many times worse,” Mazar said, “in light of the fact that the ground level is only slightly above the original Temple Mount platform.  And in fact, the bedrock has been uncovered in some places – meaning that earth that has been in place for many centuries, even possibly since the First Temple, has been removed.”

My reaction is that this could be something significant, or it could not.  What Mazar says is correct, that present ground level of the Temple Mount is generally very close to ancient ground level.  But it’s possible that there was construction in this area in the intervening 1,900 years since the Second Temple was destroyed in A.D. 70.  But it is absolutely critical that the wall (and everything else underground) be studied carefully, so that a proper assessment can be made.  The finds underground are important, whether they’re from the Second Temple, or from an 8th-century Muslim structure, or something else.  Unfortunately, it appears that we will never know because what is being dug up is being destroyed, and then it will be re-buried. 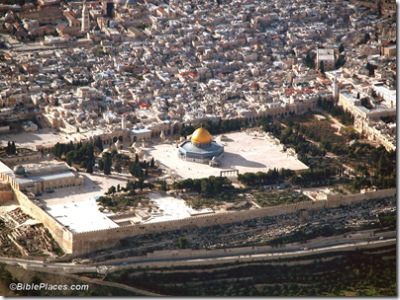 If this is a wall of the Second Temple, this would be very significant.  But further clarification is needed.  There are lots of walls “of the Second Temple.”  Most readers would probably assume that this is a wall of the  actual building itself, into which priests went to offer incense (such as Zechariah in Luke 1).  But this is certainly not the case, based on the location of the trench, which you can see in the top photo of this page.  Rather this is the area (so we believe) of the courts of the Temple, such as the Court of the Women and Court of the Gentiles.

What exactly has been found is not clear.  Barkay calls it “a massive seven metre-long wall.”  This may be a misquote, because on the face of it it makes no sense.  That a wall is 20 feet long is not unusual; even average ancient houses had walls this long.  You wouldn’t necessarily describe it as “massive,” unless you knew something about its width.  And perhaps Barkay does but he isn’t quoted on that.  I’m suspicious though because the width of the trench appears to be no more than 3 feet wide (according to photos at the previous link).  In short, it’s not clear exactly what has been found.

Barkay clearly wants to get attention with his statement, and I hope he gets it.  It’s, however, incorrect that this is “the largest such work ever carried out on the Temple Mount.”  The excavation of the massive entrance to the underground el-Marwani Mosque (in so-called Solomon’s Stables) in the late 1990s was much bigger.  Barkay knows that, as he is the archaeologist in charge of sifting all of the debris that was discarded.  On the other hand, this trench is much more centrally located that the other dig, and thus more likely to reveal ancient items of interest.

Leen Ritmeyer hasn’t posted anything on this specific discovery, but he likely will, and it will be worth reading.

UPDATE: On further reflection, it is possible that a 7-meter wall was discovered in a 3-foot trench, if the trench made a cross-section of the wall and exposed faces on either side.  But that raises another question: what is a 7-meter (22 foot) wall doing on the Temple Mount?  As difficult as relations were between Jews and Gentiles, it’s hard to imagine a wall of that thickness separating the courtyards.

Perhaps it’s a foundation of a building.  In any case, careful archaeological excavation must be done.

And it won’t be, because the Muslim authorities are afraid of history being uncovered on the Temple Mount.  I don’t say that because of hearsay; I’ve experienced that reality in person.