A few weeks ago I reported on a discovery of Persian period material in the City of David. In a presentation at an archaeological conference in Israel yesterday, Eilat Mazar gave more details about the discovery. The mainstream press hasn’t yet picked up the story, but it is reported on the web at theTrumpet.com (HT: Joe Lauer). A few excerpts in italics, with my commentary:


Yesterday, at an archaeological conference at Bar Ilan University near Tel Aviv, Dr. Eilat Mazar told 500 attendees that she had discovered Nehemiah’s wall.

This conference was the 13th Annual Conference of the Ingeborg Rennert Center for Jerusalem Studies on “New Studies on Jerusalem.” One of the lectures scheduled later that day was by Israel Finkelstein: Jerusalem in the Persian Period and the Wall of Nehemiah. No report of that talk is given in this article.


Adjacent to the palace wall stood a large stone tower archaeologists believed to be built during the Hasmonean dynasty (142-37 b.c.). Early last summer, a section of that tower, which was built on a steep slope just outside the palace, began to give way, indicating it was on the verge of collapse. And so what started as a simple task of repairing a collapsing tower turned into a six-week dig—and a fascinating new discovery.

There are two towers that could fit this description. My guess is it is the northernmost of the two, because

1) the excavation had been working in close proximity to this for the last couple of years, including workers standing on top of it for debris removal and

2) previous excavators had suggested that the base of this tower was originally built in the Persian period. I’ve taught for years that if there’s any evidence in Jerusalem that has been found of Nehemiah’s wall, it’s here. What’s new, then, is the additional evidence to support this contention. 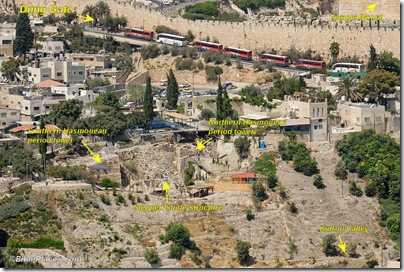 “Under the tower,” Dr. Mazar said at the conference, “we found the bones of two large dogs—and under those bones a rich assemblage of pottery and finds from the Persian period [6th to 5th centuries b.c.]. No later finds from that period were found under the tower.” The pottery is what clearly dates the time period for the tower’s construction. Had the tower been built during the 2nd or 1st century b.c., Dr. Mazar explained, 6th-century pottery underneath the wall would leave a chronological gap of several hundred years. Therefore we know, based on the pottery dating, that the tower would have been built three to four centuries earlier than previously thought, during the Persian Empire’s heyday, which is precisely when the Bible says Nehemiah rebuilt the wall around Jerusalem.

According to biblical chronology, Nehemiah returned to build the walls of Jerusalem in about 445 B.C., which is the middle of the 5th century. Thus the dating of this wall would correspond with the biblical record of Nehemiah’s wall. Furthermore, it is logical that that the Hasmoneans built their wall (the “First Wall”) above the remains of Nehemiah’s wall. The dog burials are interesting because 800 of such were found in a Persian period level at Ashkelon. The article does not mention the seal impression (bulla) with “a beautiful 5th century B.C. inscription” mentioned here previously.


Many of the landmarks described in Nehemiah’s book can now be clearly identified today thanks in large part to the work of Eilat Mazar.

False on two counts. Most of the landmarks of Nehemiah’s book are not identifiable today (for understandable reasons). And Mazar has excavated very little from the Persian period. Mazar would not make this claim for herself.


For the rest of the morning, Dr. Mazar’s colleagues spoke one after another, each of them picking apart her findings, some even rejecting her conclusions. But the entire morning session of perhaps the most important archaeological conference of the year in Israel was devoted to Eilat Mazar’s work—not her theories, her work.

This is what makes the archaeological discipline so much better than it was 100 years ago, when one archaeologist could make a claim and that was the end of the matter.


And that’s just the way she likes it. As she has said before, in the end, the stones will speak for themselves.

Rubbish. Stones do not speak for themselves. Archaeology is large part interpretation, which makes it as much of an art as a science.

UPDATE (11/12): Yitzhak Sapir was at the conference and would have written an entirely different article.