In advance of the upcoming National Geographic special on Herod’s tomb, as well as the cover story of the same on the December issue of NG, archaeologist Ehud Netzer held a press conference today announcing the most recent discoveries.  You can read the Hebrew University press release (with photos) and articles in Arutz-7, Haaretz, and National Geographic.  Below are selected portions of the articles.

The findings include coffins of Herod’s family, a theater with a VIP room, and two coffins containing the remains of most likely Herod’s wife and the wife of Archelaus, Herod’s son. The new findings further support the idea that the grave discovered last year belongs to Herod the Great. (Arutz-7)

Netzer described the winter palace, built on a largely man-made hill 680 meters high, as a kind of country club, with a pool, baths, gardens fed by pools and aqueducts and a 650-seat theater. (Haaretz) 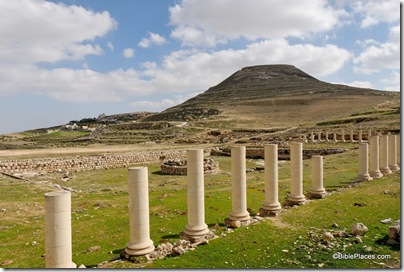 A theater that could hold an audience of 750 was discovered not far from the mausoleum. In front of the seating area is a large room for VIPs, from which the king and his close friends would watch the shows. (Arutz-7)

“In Herod’s private box at the auditorium, the diggers discovered delicate frescoes depicting windows opening on to painted landscapes, one of which showed what appeared to be a southern Italian farm,” said Roi Porat, one of Netzer’s assistants on the digs. Just visible in the paintings, dating from between 15-10 B.C., are a dog, bushes and what looks like a country villa. (Haaretz)

“Normally in Judean art you wouldn’t paint scenes such as these with animals. The style is so similar to what is known from Italy, it really looks like a team came over to do the painting,” said Rachel Chachy-Laureys, a surveyor working with Nezter. “It fits the context.” (National Geographic)
The theater, its two side rooms and VIP section, were intentionally destroyed when Herod constructed the cone-shaped artificial mountain, which enclosed the round structure that stood at the top of the hill. (Arutz-7)

“What we found here, spread all around, are architectural fragments that enable us to restore a monument of 25 meters high, 75 feet high, very elegant, which fits Herod’s taste and status,” [Netzer] told The Associated Press. (Haaretz)

In the excavation that took place this year in the area of the mausoleum, the remains of two white-colored tombs were found, most likely belonging to Herod’s family. The bright red and elegant coffin of Herod, which was displayed last year, is now completely restored, along with a large tomb. Prof. Netzer ascertains that the red coffin is the burial coffin of Herod. In contrast to the white coffins, the red coffin was shattered into hundreds of pieces, and spread throughout the mausoleum area. Prof. Netzer estimates that Malthace the Samaritan was buried in the larger of the two white burial coffins. (Arutz-7)

One big question remains: Where is Herod’s body?  “We have only found a very small number of human bones at the site and have not been able to come to any conclusions,” Netzer said. “We have not yet finished digging and have only uncovered a small area.”  But he does not believe the king’s remains will ever be recovered. (National Geographic)

Previous discussion and photos of Herod’s tomb can be found here.