Qeiyafa: Is it biblical Gob?

Nadav Na’aman has written an article (pdf) in the Journal of Hebrew Scriptures suggesting that Kh. Qeiyafa is Gob.  Na’aman begins with the conclusion that Qeiyafa is a Philistine site.  He does this by dismissing three lines of evidence from the excavators (pottery, absence of pig bones, Hebrew inscription).  I am unconvinced by this part of the discussion, but I don’t think it undermines the rest of his presentation.

The next paragraph is of most interest to me, as I previously suggested that Qeiyafa be identified with Ephes-dammim.  Let’s follow Na’aman’s line of reasoning.  It’s important to note that his cursory dismissal allows him to move to a more radical proposal.  His text is in bold and my comments are in brackets.

The description [of 1 Sam 17:1-2] indicates that the story was written after the consolidation of the kingdom of Judah, when Socoh (and Azekah) were Judahite cities. [He presupposes, contrary to the biblical account, that Judah was only formed many years after the time of David.] According to the description, the Philistines encamped south of the Elah Valley, where Ephes-dammim must be sought, and Saul and his army arrived from the northeast and encamped north of the valley. [Read 1 Sam 17:1-2 again.  It says nothing about the Philistines being “south.”  Perhaps it was (and I have believed for many years that it was), but it only says that Ephes-dammim is between Azekah and Socoh, and as my photos here show, Qeiyafa is both between the two sites and north of the Elah Valley.] Although the Israelite army encamped not far from Khirbet Qeiyafa, this important stronghold is not mentioned in the story. [Whoa, see how he did that?  He just jumped right over the possibility that Qeiyafa is Ephes-dammim, because it “must” be on the south side.] Evidently, the site was destroyed and deserted at the time when the story was written. [This is typical of Na’aman’s work: one possibility, however unlikely, becomes the foundation for another possibility, which then becomes certainty, and the foundation for a larger theory (see the rest of the article).  But if you pull out one card, the house comes falling down.  Since his creative theory developed in the rest of the article requires precluding Qeiyafa from being Ephes-dammim, he must not allow this very real possibility to detain him.] 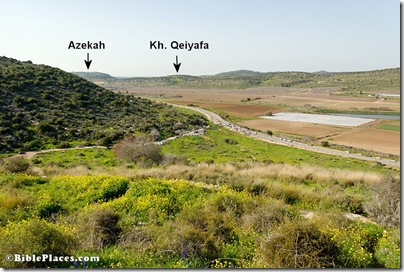 If you’re going to continue with Na’aman, you have to accept that 1) the highly detailed account of David vs. Goliath is pure fiction based upon a historic “kernel” that bore no relation to it; 2) the author of Samuel was ignorant (or unconcerned) that he was including the same “story” twice – both the kernel and the later embellishment.

A better approach is to recognize the close similarities between 2 Sam 21:19 and 1 Chron 20:5 and acknowledge that these are the same story, but 1 Sam 17 is a different event.  There are textual difficulties in the two brief accounts, but you can’t explain David out of the Goliath story of 1 Sam 17 by scribal errors.  Instead you have to believe in deliberate deception and/or incredible ignorance.

(Much of the scholarly approach to the OT is predicated on these two principles: most ancients were stupid, and the few brilliant ones were liars, albeit espousing the worship of a highly ethical God.)

I do not, however, think that a rejection of Na’aman’s proposals to this point necessarily disqualifies his identification of Qeiyafa as Gob.  2 Samuel 21:18-19 mention two battles with the Philistines, and since 1) Qeiyafa is a logical place of conflict between Israelites and Philistines and 2) Gob has not yet been identified, I think it is a plausible idea.  I just think that Na’aman has much less evidence to support it than he thinks he does.

John Hobbins has written a lengthy analysis of Na’aman’s article.  He makes some good points against the identification of Qeiyafa as a Philistine site.  One problem, as I see it, is that we should not assume that the situation was static in this period of Israel’s history.  Quite possibly, sites changed hands.  In fact, that seems to be what is at stake in the narrative of David and Goliath.  The Shephelah was the contestable ground in the 11th century (see also the story of Keilah in 1 Sam 23), and the goal was to expand one’s borders.  In other words, Qeiyafa may have been built as a Philistine fortress but later taken by the Israelites, or vice versa.

Hobbins then agrees with Na’aman’s proposal that Qeiyafa is Gob.  Since the whole thesis depends on 2 Sam 21:19 being accurately preserved and thus contradicting 1 Sam 17 and 1 Chron 20:5, Hobbins and Edgecomb discuss some more technical aspects of textual criticism of these verses in the comments section.  While I agree with Edgecomb on this, I would make this overall point: it’s not reassuring when a grand theory is built upon a difficult text against other easier texts. It is better to follow 1 Sam 17 than to undo it based upon tenuous theories and emendation of brief, problematic verses elsewhere.

Tomorrow I will respond to the proposal by archaeologist Yosi Garfinkel that Qeiyafa is Shaarayim.

4 thoughts on “Qeiyafa: Is it biblical Gob?”