Qeiyafa: Is it biblical Shaaraim?

The San Francisco Chronicle is reporting that excavator Yosi Garfinkel believes Khirbet Qeiyafa is Shaaraim (Shaarayim), and this is confirmed by David Willner on the excavation website. This suggestion does not need to deny the David and Goliath story to find support (as does the Gob identification). Garfinkel will make a presentation (or two) this week about the site, but from what has been revealed thus far, there are two bases for his conclusion. 1) Shaaraim is mentioned in the story of David and Goliath (1 Sam 17:52). 2) Garfinkel found a second gate at the site last week. This is suggestive because the name “Shaaraim” means “two gates.”

This portion of the article is worth quoting:

Garfinkel, who has excavated numerous sites in Israel, says he discovered the second gate after noticing an apparent break in the massive stone wall as he walked along the 2,100-foot long structure that faced the road to Jerusalem. After two days of digging, his hunch paid off. A second entrance constructed from massive stones lay just a few feet beneath the topsoil.
“This is the only city from the Iron Age in this region ever found with two gates,” said Garfinkel as he clambered over the huge structure. “It was probably a mistake. It made the city more vulnerable. It might explain why it appears to have been settled only twice, for very short periods.”
Garfinkel says he is certain the newly-found massive stone gate was the main entrance to the city that existed at the beginning of the 10th century B.C. and then again for a few years at the time of Alexander the Great.
“It is enormous, it has symbolic value demonstrating authority and the power of the kingdom,” Garfinkel said while describing the huge building blocks of more than 3 feet square and 10 feet long, each weighing more than 10 tons. “They are the largest ever found from the Iron Age. If King David ever came here from Jerusalem, he entered from this gate. It is likely we are walking in the footsteps of King David.” 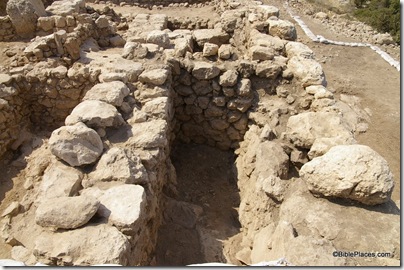 This is very significant, for not only are there very few early 10th-century fortifications in Israel, I don’t know of any with two gates. There are, however, some potential problems. 1) Apparently only a few days have been spent in excavation of this second gate, which would suggest that caution in conclusions at this point is wise. 2) Who built this massive gate? If it dates to the early 10th century, then one might connect it with David’s kingdom. But if that is so, then it was not the scene of his pre-kingship battle with Goliath. Perhaps, then, it was built by King Saul. The problem with that is that scholars don’t believe he had any real power. 3) Why were two gates built? Did someone who went to all the work in moving stones weighing more than 10 tons really not think through the problem of having two gates? I have trouble believing that we today understand their warfare better than they did.

There are some other potential problems with this identification. The only other place where Shaaraim is mentioned in the Bible is in a list of cities of Judah.

Joshua 15:33-36 (NASB) In the lowland: Eshtaol and Zorah and Ashnah, 34 and Zanoah and En-gannim, Tappuah and Enam, 35 Jarmuth and Adullam, Socoh and Azekah, 36 and Shaaraim and Adithaim and Gederah and Gederothaim; fourteen cities with their villages.

This text proceeds roughly from north to south (Sorek Valley, then Elah Valley). The sites in the Elah Valley appear to proceed from east to west: Adullam, Socoh, Azekah. If so, this suggests that Shaaraim would be located west of Azekah. If Shaaraim was Qeiyafa, it would logically fit between Socoh and Azekah.

This location (west of Azekah) seems to be supported by the David and Goliath account. Shaaraim is mentioned only at the end of the story. The Philistines fled west from the battle to Gath and Ekron, dying on the way of Shaaraim.

1 Samuel 17:52 (NASB) The men of Israel and Judah arose and shouted and pursued the Philistines as far as the valley [or Gath], and to the gates of Ekron. And the slain Philistines lay along the way to Shaaraim, even to Gath and Ekron.

Normally, this construction “way of [place]” means the road to a certain place (e.g., 1 Sam 13:17-18; 2 Sam 2:24; for a myriad of examples, see Dorsey, Roads and Highways of Ancient Israel, 47-50, where he finds only one road in the Bible not named after its destination, Num 20:17). It is difficult to conceive of a battle scenario where the road they are fleeing on would be called the “way of Shaaraim” if Shaaraim = Qeiyafa. 1) If the Philistines were encamped on the south side of the valley and the Israelites were encamped on the north side near Qeiyafa, why would the Philistines flee on the “way of Shaaraim”? 2) If the battle was much farther to the east, and the Israelites were encamped in the lower slopes of the hill country and the Philistines were encamped on the eastern end of the Elah Valley, a) one wonders why it was called the way of Shaaraim and not the way of Azekah, the bigger and more well-known city nearby and b) one cannot account for the Philistines being encamped “between Azekah and Socoh.” In short, Shaaraim is best located on the far (eastern, northern, or southern) side of Azekah, and not on the side closer to the battlefield. This also makes sense of the following phrase “the way of Shaaraim as far as Gath and Ekron.”

John Hobbins interacts with Garfinkel’s proposal of Shaaraim. I agree with him on point #1 but do not think he goes far enough (as I have above). I disagree on point #2, as it seems that if the Philistines are fleeing towards Shaaraim, then this would likely be in their territory. To say it another way, if Qeiyafa = Shaaraim, we should expect it to be a Philistine site (at least at the time of the battle). Garfinkel’s evidence suggests that Qeiyafa is an Israelite site.

This does not address the reality of “two gates” at Qeiyafa. If we are certain that both were in use at the same time, and we know that there are no other sites in the area that had two gates, this would be strong evidence. I don’t know how certain the excavators are that the two gates are contemporaneous.
I’m very hesitant to say that there are no other sites with two gates, since until a week ago, even Qeiyafa was not known to have two.

By way of conclusion: If Qeiyafa is Shaaraim, either 1) the Israelites were encamped here at the time of the battle of David and Goliath or 2) the Philistines were not encamped between Azekah and Socoh or 3) Shaaraim = Ephes-dammim. Of the three, I find #1 to be most likely, but it then is strange that a) Shaaraim is not mentioned as the place of Israel’s encampment and b) the Philistines are said to have fled on the way of this Israelite site. From the Philistine perspective, the road from Gath to the east might be called the “way of Shaaraim” (though it requires ignoring Azekah), but the biblical record was not written from the Philistine perspective.

Neither this post, nor the previous one, furthers my suggestion that Qeiyafa is Ephes-dammim. But they do, I believe, make the identifications with Gob and Shaaraim less attractive. Everyone in the discussion is working with a fraction of the total evidence. Garfinkel, as excavator, has more of the evidence available to him, but it is not difficult to imagine future discoveries that significantly clarify or alter the picture. To that end, we wish the excavators great success in their on-going work.

6 thoughts on “Qeiyafa: Is it biblical Shaaraim?”