The headline above reflects the article’s story, but I think a better English word for the discovery would be “synagogue.”  Traces of many Jewish synagogues have been found in Turkey and this is likely just another.  The word “temple” is sometimes used to refer to a worship building, without intending to specify a singular structure such as that in Jerusalem.

The location of the discovery is interesting to New Testament readers for another reason: Paul visited this place.  A search of the NT won’t reveal any references to Andriake/Andriace, but this was the name of the port of Myra, where Paul changed ships on his way to prison in Rome (Acts 27:5-6).

Ongoing excavations at the ancient port city of Andriake in Lycia — located in Antalya’s Demre district — have uncovered a centuries-old Jewish temple.

Site chief Dr. Nevzat Çevik, an archaeology professor at Akdeniz University, told the Anatolia news agency that his team believes the temple is from around the third century. Located on a choice spot facing the sea, the temple was likely built following a law instituted in 212 that allowed Jews the right to become Roman citizens, Çevik said.

The find is important as it is the first archaeological trace of Jewish culture found in Lycia. “For the archaeological world, the world of science and particularly for Lycian archaeology and history, we’re facing an important find here. It’s the first remnant of Lycian Jewish culture we’ve found,” Çevik said, describing the find. “When we first discovered the temple, we weren’t sure what it was, but after continuing to dig, the archaeological findings and particularly the first-quality marble slabs that we found were evidence for us that they were part of a Jewish temple.”

The finding came as a great surprise, the archaeologist said, and the team is continuing to work excitedly. “To encounter remnants of Jewish culture for the first time has caused great excitement. We’re adding another layer to what we know of Lycian culture — now that we know that there was a Jewish presence in Lycia as well, we can follow this path and better understand other finds,” he explained.

As part of the temple find, the team located a menorah and pieces inscribed with traditional Jewish symbols and figures. Çevik also noted the importance that the find would eventually have for tourism in the region. 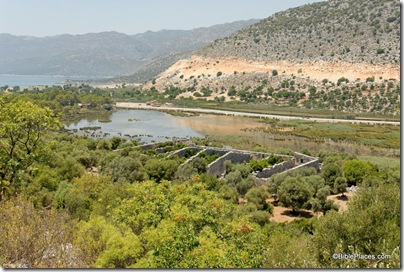 UPDATE (10/8): The story is covered by the Jerusalem Post.