The Israel Antiquities Authority has announced, with a rather mild headline, the discovery of a synagogue at Magdala (Migdal) dating from 50 B.C. to A.D. 100. I would consider this big news, even though, as far as I can tell, no one is reporting it yet (except Joe Lauer, who always seems to know everything first).

Magdala was the home of Mary Magdalene, one of Jesus’ disciples. That, together with the fact that its location was near the center of Jesus’ ministry (Capernaum, Chorazin, Gennesaret, etc.), makes it quite likely that Jesus visited Magdala. Matthew records that “Jesus went through all the towns and villages, teaching in their synagogues,” and I see no reason that Magdala would be excluded (Matt 9:35; cf. 4:23). Thus it is likely, in my opinion, that Jesus visited this synagogue. 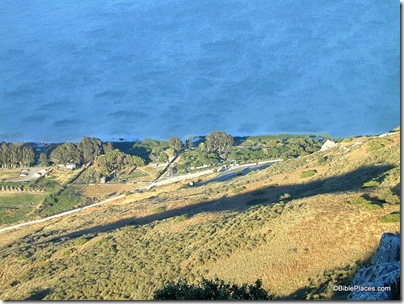 This is not the same thing as saying, as they did last year, that “archaeologists have discovered vases of perfumed ointment which may have been used by Mary Magdalene to anoint the feet of Jesus.”

This is not the first synagogue excavated that Jesus visited. He almost certainly was in (an earlier version) of the Capernaum synagogue, may have been in the Chorazin synagogue (though there is a dating problem), and could have been in the Gamla synagogue. We know of other 1st century synagogues, but it is most unlikely that Jesus visited those at Herodium and Masada, particularly since they were constructed after his death.

The discovery is most significant to me because it puts Magdala “on the map,” so to speak. Before this synagogue was found, visitors would only zip by the site on the highway while a rushed tour guide cried out, “there is Magda…well, too late. It was behind those trees and next to the ferris wheel.” More intrepid explorers could do no better than stand at a fence and look at a few old walls.

Hopefully these new excavations will give the world a chance to see a portion of this ancient town.

The IAA has three high-res photos you can download (zip file), and the press release begins as follows:

A synagogue from the Second Temple period (50 BCE-100 CE) was exposed in archaeological excavations the Israel Antiquities Authority is conducting at a site slated for the construction of a hotel on Migdal beach, in an area owned by the Ark New Gate Company. In the middle of the synagogue is a stone that is engraved with a seven-branched menorah (candelabrum), the likes of which have never been seen. The excavations were directed by archaeologists Dina Avshalom-Gorni and Arfan Najar of the Israel Antiquities Authority.
The main hall of synagogue is c. 120 square meters in area and its stone benches, which served as seats for the worshippers, were built up against the walls of the hall. Its floor was made of mosaic and its walls were treated with colored plaster (frescos). A square stone, the top and four sides of which are adorned with reliefs, was discovered in the hall. The stone is engraved with a seven-branched menorah set atop a pedestal with a triangular base, which is flanked on either side by an amphora (jars).
According to the excavation director, Dina Avshalom-Gorni of the Israel Antiquities Authority, “We are dealing with an exciting and unique find. This is the first time that a menorah decoration has been discovered from the days when the Second Temple was still standing. This is the first menorah to be discovered in a Jewish context and that dates to the Second Temple period/beginning of the Early Roman period. We can assume that the engraving that appears on the stone, which the Israel Antiquities Authority uncovered, was done by an artist who saw the seven-branched menorah with his own eyes in the Temple in Jerusalem. The synagogue that was uncovered joins just six other synagogues in the world that are known to date to the Second Temple period”.

The full release is here. I don’t know enough yet to comment on the relationship of this newly excavated building to another previously excavated at Magdala which was identified (with controversy) as a synagogue. From the photos and the decoration, there should be little debate as to the function of this building. 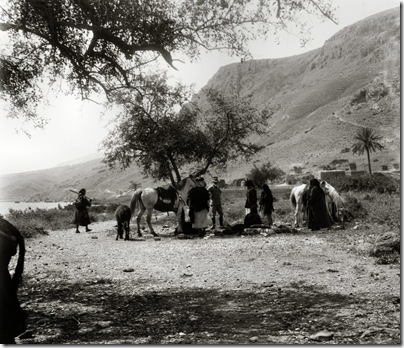 Magdala from the north, early 1900s

This photograph is one of 600 high-resolution images in the newly released Northern Palestine CD, volume 1 of The American Colony and Eric Matson Collection. Photo: Library of Congress, LC-matpc-07447 (but currently misidentified there).

PrevPreviousMt Zion Inscription is Cryptic
NextEn Gev, Then and NowNext