Pool of Siloam, Then and Now

Understanding the ancient Pool(s) of Siloam is a bit difficult.  First, there is the pool where Hezekiah’s Tunnel emerges.  This pool is small, shallow, and unimpressive.  In 2004, a monumental reservoir was discovered to the south, dating to the 1st century A.D. (for more on that, see here and here).

Scholars today do not yet know how the two pools are related.  The Lower Pool was quite likely the place of the miracle of the healing of the blind man (John 9).  The area above was the site of a pool in the Late Roman period, and continued in use in the Byzantine period when a 5th century church was constructed over it.  What existed here before the destruction of Jerusalem in A.D. 70 is not known. 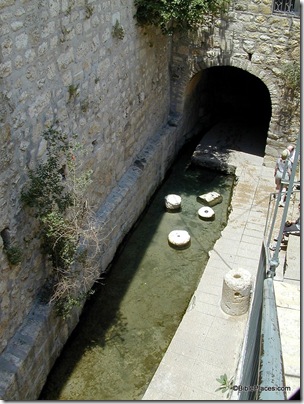 Pool of Siloam, view to the north, present day

Today if you visit the pool at the end of Hezekiah’s Tunnel, there are a few column drums from the Byzantine pool, but little else to suggest the beautiful complex that pilgrims visited.  That hasn’t always been the case, however, for the excavations of Bliss and Dickie in the 1890s revealed some of the ancient walls.  In the photo below, behind the donkey is a wall of large, well-dressed stones with a classical molding.  The excavators identified this as the northern side of the square Roman pool. 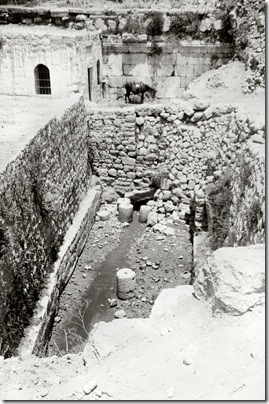 After the excavations, Muslims erected a mosque over the northwestern corner of the area, covering all traces of the earlier pool and the Byzantine church built to commemorate it.

This photograph is one of 45 in the “City of David” set included in the Jerusalem volume of The American Colony and Eric Matson Collection.  Photo: Library of Congress, LC-matpc-08471.

3 thoughts on “Pool of Siloam, Then and Now”