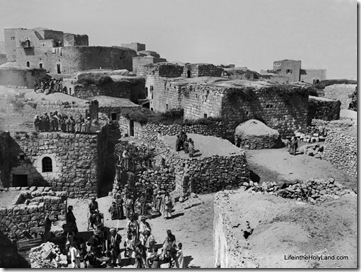 “The most important and most frequented portion of the house next to the reception-room is the roof.

The roof is made in various ways. Mr. Haddad speaks of a common way in Syria, to lay beams across from one side to the other of the walls, then a mat of reeds on the top of these beams, then some bushes of a thorn, and finally, a coating of clay or earth, and scatter sand and pebbles on the top of the earth, then they roll it with a roller of stone, to make it compact, so that the rain will not run through.

Sometimes a little space three or four feet square is cut in the roof, with separate pieces, made like the rest of the roof, or covered with mat or tiling, which can be taken up when desired. It might have been such a place in the roof that was used in letting down the paralytic on his rug or quilt, which would be the only bed an Oriental in such condition would be likely to have.

These roofs are flat, and the terraces or parapets around them are low, and made of dried bricks, or stone, just like the wall. If a higher terrace is required, it is made of lattice-work to screen the women of the household. In summer the people of Palestine, Egypt, and Mesopotamia usually sleep upon the housetops. The servants sleep on bedding or the ground in the court below. The very poor people often sleep in the streets, the open squares, the market-places, and courts, rolling themselves in a coverlet, a rug, or their outer garments, and screening their faces.

Many occupations are carried on upon the roof. Here the wheat is washed and spread to dry, the flax is prepared, and vegetables and fruits to be stored in winter; wool and cotton when washed is spread out upon the roof, clothes are hung there to be dried; as now, so has it been of old” –Edwin Wilbur Rice, Orientalism in Bible Lands (1910): 249.

The photo and quotation are taken from the Traditional Life and Customs volume of The American Colony and Eric Matson Collection (Library of Congress, LC-matpc-06851).