A.D. Riddle has pointed me to a chapter that Eilat Mazar published a few years ago entitled “The Solomonic Wall in Jerusalem” (full bibliographic data below).

It includes a diagram similar to the one published on Hebrew U’s Facebook page yesterday.  I’ve added labels in English. 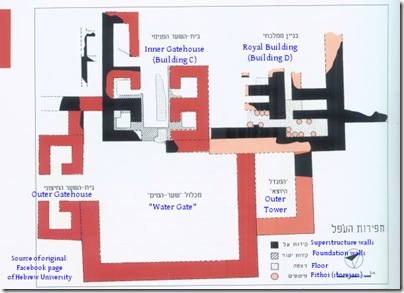 My impression in reading Mazar’s chapter is that yesterday’s press conference was mostly a re-statement of the conclusions of her 2006 article, which was based on her excavations in the 1980s.  In short, she argues that Building C is a four-chambered inner gatehouse which may have been an entrance into a royal palace.  She notes that its dimensions are “virtually identical” to those of palace Gate 1567 at Megiddo VA-IVB.  With regard to date, she states that “the ceramic data were insufficient to provide a more precise determination within the terminus post quem time frame for the construction of Building C.”

She found two floors in Building D, the later of which was laid “no earlier than the 8th century.”  She believes an intact black juglet was placed under a foundation stone as a “construction offering” and dates the building to the 10th century.

She concludes in part:

Based on the finds sealed below the floors of Buildings C and D, the construction of the fortification complex in the Ophel should be dated to the 10th century BCE.  This date corresponds to the biblical passage announcing that King Solomon built a defensive wall around Jerusalem.  There is no reason to assume that someone other than Solomon constructed or reconstructed the Ophel fortification line at some time during the 10th-9th centuries BCE.

It sounds as if Mazar has found more evidence in her recent excavation that confirms her previous conclusion that this fortification system dates to the time of Solomon.  I don’t believe that her previous conclusions met with much enthusiasm from the scholarly community; we’ll see how the archaeologists evaluate her new material.

The bibliographic data for this publication is as follows:

Mazar, Eilat. 2006 “The Solomonic Wall in Jerusalem.” Pp. 775-786 in “I Will Speak the Riddles of Ancient Times”: Archaeological and Historical Studies in Honor of Amihai Mazar on the Occasion of His Sixtieth Birthday.  Ed. A. Maeir and P. de Miroschedji. Winona Lake: Eisenbrauns.

This two-volume work is available from Eisenbrauns.

There was some question yesterday about the purpose of the dig and the relationship of the material excavated in the 1980s with that uncovered recently.  Science Daily gives some background:

The excavations in the Ophel area were carried out over a three-month period with funding provided by Daniel Mintz and Meredith Berkman, a New York couple interested in Biblical Archeology. The funding supports both completion of the archaeological excavations and processing and analysis of the finds as well as conservation work and preparation of the site for viewing by the public within the Ophel Archaeological Park and the national park around the walls of Jerusalem.

This sounds like a clean-up dig, where the archaeologist returns to the area to do some additional work in preparation for publication of the reports.  Unfortunately, Mazar seems to have presented it as all brand-new discoveries.  I’m still not sure what they “know” now that they didn’t “know” six months ago.

The Arutz-7 article now includes a 4-minute video of Eilat Mazar.  Unfortunately the guy holding the video camera doesn’t seem to know where to point the camera, as he shows lots of excavations entirely unrelated to the Iron Age wall, “gate,” and tower.  The explanation is geared towards those who are new to the subject and she doesn’t clearly answer the reporter’s question about what is new and what is not.

G. M. Grena notes in a comment to yesterday’s post that the three LMLK handles shown in an excavation photo have not been published previously.

Leen Ritmeyer comments on his blog about the difficulty of identifying one of the structures as a gate:

The possibility of having found an Iron Age gateway was proposed in confidentiality to Eilat Mazar by myself, but it was reported to the press before I was given a chance to explore this hypothesis (Jerusalem Post, April 22, 1986). The difficulty of identifying the building that was excavated by the late Prof. Benjamin Mazar with a gateway is that the chambers are constructed very differently from gate chambers of that period.

Ritmeyer has some other interesting observations, though be sure to note his update and the comment by Barnea Levi Selavan.

The Jerusalem Post reports on the story and includes this caution from a friendly archaeologist:

Aren Maeir, an archeology professor at Bar Ilan University, said he has yet to see evidence that the fortifications are as old as Mazar claims. There are remains from the 10th century in Jerusalem, he said, but proof of a strong, centralized kingdom at that time remains “tenuous.”

These new discoveries, along with those of a previous dig in a different area of the city of David, contradict contrary Palestinian claims that the Jews have no claim to the area. They also debunk the assertions of some Israeli archeologists who have sought to portray the kingdom of David and Solomon as an insignificant tribal group and not the regional empire that the Bible speaks about.

My response: since the issue has obvious political implications that can be seized on by guys like Tobin, archaeologists have a greater burden to exercise care in publicizing their finds.  Mazar’s approach seems to be the opposite: get the sensational headline before careful analysis or peer review can be done.  Sometimes this leads to embarrassing situations like reading an inscription backwards.

I find this photo and photo caption interesting:

She certainly knows how to get attention…