The story of the discovery of the Dead Sea Scrolls is a fascinating one, though it’s not always easy to separate fact from fiction.  For instance, the notion that a shepherd accidentally discovered the first cave of scrolls while chasing a stray sheep seems less likely given the history of the Bedouin in finding and selling ancient artifacts. 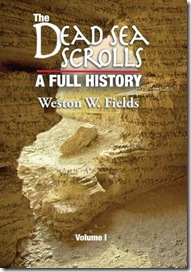 The intrigues of the first decade is now clearer with the publication of the first volume of Weston Fields, The Dead Sea Scrolls: A Full History.  The book is being promoted by the publisher with a interesting review by Jerome Murphy-O’Connor.

You can download the full review as a Word document here.  You can get a flavor from the first paragraphs:

Even though the Dead Sea Scrolls were discovered only 62 years ago, much of their early history has been shrouded in obscurity. Details of persons and places were compromised by focus on the scrolls themselves, and on occasion deliberate deception facilitated the continuation of illegal, but highly profitable, excavation. In 1998 Marcel Sigrist, OP, suggested to Weston Fields, Director of the Dead Sea Scrolls Foundation in Jerusalem, that the only way to acquire clarity would be to record critically the testimony of the original eye-witnesses. Some had already died, others were getting old, and this would be the last opportunity.
Fields took up the challenge, and the thoroughness of his oral history is illustrated by the fact that he even gives the number of sheep (about 55) in the care of Muhammed ed-Dib the day he threw the stone into what became Cave 1. The surviving actors were all happy to cooperate, and a number revealed that they had extensive private archives that had never been exploited. These amounted to tens of thousands of pages of precise written and photographic documentation, which was contemporary with the events. This greatly widened the extent of the project, and gave it a much more solid base. No longer did Fields have to rely on aging memories, and the unsupported word of one witness against another. He had documentary evidence that could be compared, contrasted, and critically evaluated. In the case of the ten actors who have died since the project began he just got there in time.
So much material became available that it quickly became clear that one volume would not be enough. The change in de facto ownership of the scrolls in the aftermath of the Israeli invasion of June 1967 might seem an obvious place to break. Fields, however, opts for 1960, both for practical reasons, and because that year caused an even greater upheaval in the publication of the scrolls. The Rockefeller funds supporting the full-time scholars working at the Palestine Archaeological Museum (PAM) dried up, and the team had to disperse to find jobs that ate into the time they could devote to the scrolls. Publication inevitably slowed.
From 1947 to 1960 Fields follows a strictly chronological order, often with subheadings of great precision, e.g. “19 July 1947, Saturday”; “Last week of July 1947” . He wisely refuses to treat the scrolls as a unified whole. The circumstances concerning the discovery, acquisition, and publication of Cave 1, for example, differed radically from those of Cave 4, and again from those of Murabba‘at, and still more from those of Cave 11. Thus separate topics are treated individually and chronologically. Fields is also right in quoting as much as possible from letters and interviews. As he points out, this is the only way “to taste the flavor, and to enjoy the nuances of entire letters or other documents from the earliest actors in the unfolding drama of the scrolls” (13 my emphasis). More importantly, it enables the attentive reader to formulate his or her own conclusions based on the evidence. Was the writer stating a bare fact or merely being ironic or sarcastic? Was the presentation tailored to the recipient?

Download the full review here.  You can also read it directly online at Amazon in what initially appears to be the author’s review of his own book. The publisher’s description of the 600-page, $99 book is here.  Fields also published a 128-page A Short History in 2006.