One of the most common questions I am asked when at Qumran is the location of the Dead Sea Scrolls caves.  There are 11 caves, discovered between 1947 and 1956, and some are in the limestone cliffs while others are in the marl terrace next to the site.  Fortunately for tour guides, one of the caves is easily visible from Qumran and visitors snap their shot of Cave 4 and leave happy.

Most guides do not know where the other caves are.  They don’t need to know.  Access is either difficult or impossible, in the case of the marl terrace caves (4, 5, 7, 8, 9, and 10).  The caves in the limestone cliffs require a hike, are unmarked, and are not easy to find even if you’ve been there before.  Finding photographs of many of the caves is also difficult, though I tried to change that in the Pictorial Library of Bible Lands (and see now, Hanan Eshel’s Qumran, though even there one of the cave photographs is mis-identified and the photo of another is reversed).

The cave that the more intrepid would like to find is Cave 1.  Two of my colleagues and I spent half a day in the late 90s climbing all over the cliffs in the picture below. We had given up when the last of us spotted it on his way back to the car.  But that didn’t make it any easier to find the next time I went looking.  Years later I took a friend, and when he went back with a group in tow, he couldn’t find it.

If finding Cave 1 (or 2) is something that has haunted you, hopefully this blog post and photos will help.  If you prefer this in a printable pdf file that you can take with you on your next trip, you can download that here. 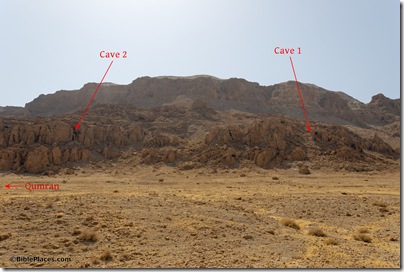 This is the most important photograph, for it gives you a frame of reference.  The photo was taken from the road leading north from Qumran to the settlement of Kallia.  The view is obviously to the west. 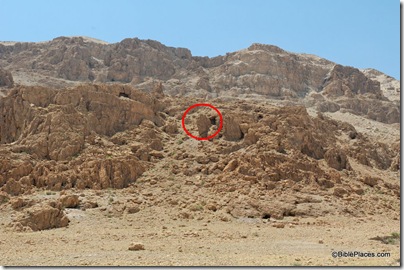 You cannot see Cave 1 from the road, or from anywhere approaching the cave, because it is hidden behind a large rocky outcropping and the cave faces south.  The key to finding it is to look for the large rock that juts out on the right side of the draw (circled above).

I do not recommend climbing to Cave 1.  The terrain is very difficult, and you will probably get hurt if you try.  I highly recommend you consult with your lawyer first, and if he releases me, my family, and all of my current and former friends from any and all liability, then you can attempt it, if you are accompanied by your medical doctor. 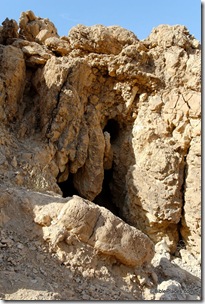 In the unlikely event one should attempt it, you would climb past the rocky outcropping and just behind it, on the right, you would see Cave 1 (pictured above).  The original cave is the hole on top.

Excavators cut away the area below in order to make the larger entrance today.  Inside Cave 1 were found the seven original Dead Sea Scrolls: Isaiah A, Isaiah B, Manual of Discipline, War of Sons of Light, Thanksgiving Scroll, Genesis Apocryphon and Habakkuk Commentary.  The cave has been excavated and no traces of any finds can be seen today. 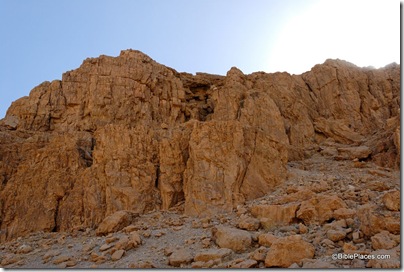 Cave 2 is a bit like a silver medal at the Olympics, and it doesn’t excite most people.  But if want to be able to see a cave without climbing up the dangerous mountainside, you can see Cave 2 from the perspective shown above.  Again, use the reference photo above to get in the area, and then this photo to narrow in on the precise cave (center top).  As with Cave 1, climbing to Cave 2 is difficult and not recommended.

Caves 3, 6, and 11 are all easier to reach, so these may be a better option for you.  Knowledge of the location of these caves is more widespread, so I will forego writing out directions to those.