Haaretz reported on this meeting yesterday, but as of now I haven’t seen an update on the ruling.

Jerusalem’s district planning council was on Sunday set to rule on a controversial museum project that archaeologists claim would destroy valuable ancient structures beneath the Old City.
The new museum is planned for the concourse beside the Western Wall of the Temple Mount – Judaism’s holiest site.
But a group of archaeologists who have petitioned the council says the new building, designed by architect Ada Karmi, would damage an ancient Roman road, flanked by rare and elaborate columns, that runs beneath the planned construction.
They say that if Jewish relics were under threat, the project would never have been allowed.
“It is impossible to exaggerate the cultural damage and the harm to antiquities that would result if the road is encased by the new building’s foundation pillars,” the archaeologists wrote in a petition to the planning council.

Whenever someone says “it is impossible to exaggerate,” it’s a dead give-away that they are exaggerating.  Unfortunately the article does not provide the names of any of the archaeologists who signed the petition. 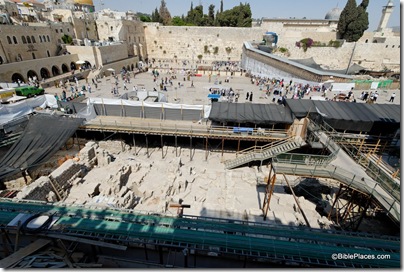 Excavations on the west side of the Western Wall prayer plaza, site of planned museum
Share: