I’ve started a list of active blogs, and would be grateful to learn of any others that you know of.

Gath – this is the best excavation blog I know of, thanks to the tireless work of the archaeologist, Aren Maeir.  This year they are excavating July 4-30, but that’s less important because Maeir updates the blog year-round.

Ashkelon – this is a primarily an educational blog written by one of the supervisors.  Note that this is a new location (as of 7/13).  The season began June 6 and wraps up on July 16.

Bethsaida – the 24th season ran from May 23 to June 26, and brief summaries and photos are posted.

Tel Burna – they had a very successful first season (June 20 – July 1) and I have hopes there will be periodic updates as they do analysis and prepare for next year’s dig.


Tall el-Hammam – the website provides season summaries, but there appears to be no blog updating readers during the winter excavation seasons (upcoming: December 10, 2010 to January 20, 2011).


Hazor – excavations are on-going now (June 20 – July 30), and the current diggers have a Facebook page where they can upload photos and videos.  The official Tel Hazor Facebook page is rather limited, and I am unaware of any blogging about the excavations.


Hippos (Susita) – the website indicates that the 2010 season will run July 4-31.  Mark Schuler has a blog for the Concordia University excavations of the Northeast Church.  Other members of the team have blogs listed at virtualdig.org.

Tall Jalul – this year’s excavation has concluded, but Owen Chesnut will be adding updates periodically throughout the year.  Though less well known, this site is one of the largest in Jordan.

Magdala – this relatively new dig plans to be in the field for an extended period over the next several years (ahead of construction).  The blog seems to be on break, but you can follow along by Twitter @magdalaisrael.


Khirbet el-Maqatir – the two-week season ended June 6.  The dig doesn’t have its own blog, but the organization sponsoring the dig does.

Dig Megiddo 2010 –  this blog is frequently updated with reports from volunteers about their experiences as well as photos posted on Facebook by Eric Cline.  The season this year runs from June 12 to July 29.


Khirbet Qeiyafa – the Elah Fortress website, with all of its photos and summaries, appears to have been deleted.  The Hebrew U website is infrequently updated.  The excavation season this year is June 20 to July 30.  Blogger Luke Chandler is volunteering and may have some reports in the weeks to come.


Ramat Rahel – the website provides general details only.  Excavations are slated for August 15-26.


Tel Rehov – this is another Israeli dig with (apparently) nothing more than a website.  The season began on June 15 and ends on July 16.

Temple Mount Sifting Project – this blog provides periodic updates on related issues, but daily
finds are not reported.
In addition to the blogs and new sources (for major discoveries), a couple of radio programs are available online to keep you up to date with interviews with the archaeologists.  These include the

The Book and the Spade (Gordon Govier) and LandMinds (Barnea Levi Selavan and Dovid Willner). 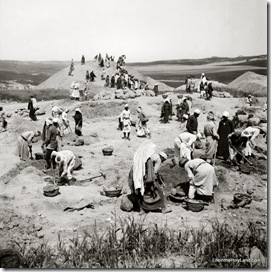 Excavations at Beth Shemesh, 1920s
This photo is from the Southern Palestine volume of The American Colony and Eric Matson Collection (Library of Congress, LC-matpc-09121).
Share: