Most visitors to the Garden Tomb do not realize that a Muslim cemetery sits on the hilltop above.

But it is construction work in one cemetery that is recently alleged to threaten the safety of those in another.  The original story in Ma’ariv is summarized in the Caspari Media Review:

According to this report, the Wakf – the Islamic trust most well-known for controlling and managing the Islamic edifices on the Temple Mount – is currently building a wall above the Garden Tomb, “an historic site important to Christianity,” which is “threatening to undermine relations between the three faiths in the city.” The work is part of the maintenance and expansion of the Muslim cemetery located above the Garden Tomb. “Thus far, high wooden foundations of a height of two meters have been laid at the site, and the work is due to be completed by the addition of concrete on top of the wooden beams.”
The managers of the Garden Tomb have protested, fearing that the wall might fall on tourists coming to visit the site. “‘They didn’t show us any plans or ask for our agreement regarding the building work,’ says Steve Bridge, the deputy manager. ‘More than a quarter of a million pilgrims visit the site, and a disaster may occur if something is not done properly. Three or four hundred worshippers stand right under the wall every day. Were it to fall while there are visitors here, there might well be a catastrophe the like of which we’ve never seen.'”
The managers of the Garden Tomb are also worried that the incident might lead to “irreversible damage” to the tomb itself – which in turn would spark a serious crisis in Jewish-Muslim relations in Jerusalem and internationally. “‘It’s a scandal,’ added Bridge. ‘We’ve turned to them with a list of questions, and I hope that we will receive satisfactory answers.'” According to the municipality, the building was begun without permission and in contravention of the customary procedures. The Wakf announced that they intend to sort out the problems with both the municipality and the Garden Tomb. 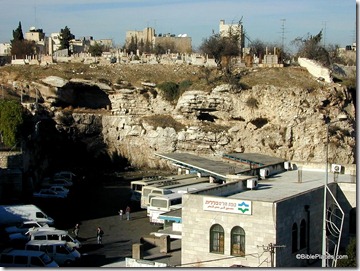 The Muslim cemetery sits atop the hill of the “skull” (center) and the tomb (off the edge to the left).

PrevPreviousQuestions about a Hasty Excavation in Jerusalem
NextThe Palace of David: A Flawed ProposalNext