Benj Foreman, professor at the Israel Bible Extension of The Master’s College, has responded to my post about Rachel’s Tomb with observations worthy of more attention than they’ll get in a comment.

Thanks for your synthesis. I’ve heard you teach this before, but here are a few points to consider:

1) 1 Sam 10:2 does not need to be translated “in the territory of Benjamin at Zelzah,” as you do in your post. The Hebrew “gevul” can mean border, and often does. Though it can mean “territory,” it often emphasizes the limit of a territory. It’s possible, therefore, that Samuel is saying something like this: you will meet two men on the border of Benjamin at Zelzah, near Rachel’s tomb (I rearranged the word order, i.e. “Rachels’ tomb” for clarity).

2) Rachel clearly dies “on the way” to Ephrathah in Gen 35:19–20. This means that she wasn’t buried in Bethlehem, but on the way there. So the fact that Bethlehem is 5 miles from the border need not be troublesome.

3) It’s not “certain” that there was a Bethlehem in Benjamin. I’m not convinced that the Bethlehem in Neh 7:26 is a different from Bethlehem in Judah. You’re right that it seems to be listed in an odd place (amidst Benjamite cities), but considering the fact that Bethlehem of Judah––the city of King David––is not listed anywhere else in the list, makes it unlikely to me that “Bethlehem” here refers to a city previously unknown to us. Wouldn’t we expect there to be at least a few returnees from David’s hometown?

5) What about Jer 31:15? The fact that Rachel is associated with Ramah is initially striking. However, perhaps we should note first of all that the text makes no connection to Rachel’s death. Rather, she is weeping for her children. Why? Because they are no more. But why single out Rachel? The answer may be because Jeremiah is using “Ephraim” as an object lesson for Judah (cf. v. 18, 20). She, one of the matriarch’s of Israel, was the “mother” of Ephraim: she bore Joseph, to whom were born Manasseh and Ephraim.

6) Migdal Ha Eder in Gen 35:21 and Micah 4:8 is not problematic. It’s near Jerusalem: between Jerusalem and Bethlehem. Why does it have to be NORTH of Jerusalem? (I just read your response to Leen and there you say that it could be in any direction from Jerusalem….)

7) Summary: if we translate “gevul” in 1 Sam 10:2 as border, then having Rachel’s tomb somewhere south of Jerusalem ceases to be problematic. Rachel died “on the way” to Bethlehem (i.e. Ephrathah) and was buried somewhere on the border between Judah and Benjamin near an unknown site called Zelzah. The traditional location is probably unlikely since this is nearly 5 miles from the border of Judah/Benjamin.

8) Maybe I left out one vital piece of evidence and all of this will crumble. 🙂 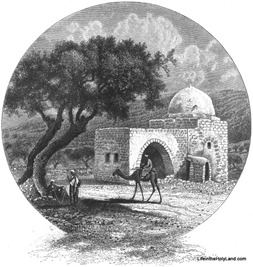 PrevPreviousRachel’s Tomb: The Bible vs. Tradition
NextMore Top Stories of 2010Next