What would you expect from a book entitled A Visual Guide to Gospel Events?  This new work certainly does not disappoint in the area of illustrations.  Every two-page spread has at least four images.  But while I enjoy good photos, maps, and artwork, the quality of a book really hangs on the text.

The work is subtitled Fascinating Insights into Where They Happened and Why.  Indeed this is what makes the book most valuable to me.

There are plenty of Bible atlases, but it is the nature of reference works to present the “straight facts.”  Authors usually do not have a lot of room to present their new theory or exciting discovery.

This book, like its predecessor, has no such restraints. 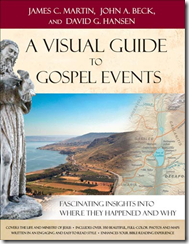 That is particularly noteworthy when the authors are James Martin, John Beck, and David Hansen.  These scholars are well known for their creative insights and helpful interpretations of Scripture.

It is not easy to capture an argument in a few words, but as I read I marked a few observations that are characteristic of the contribution that this book makes.

From the section entitled, “Jesus Becomes a Rabbi in the Southern Jordan Valley”:

On his fourth attempt to curse Israel, Balaam spoke of a special child of Jacob….What the Lord had spoken through Balaam was now being fulfilled at Bethany beyond the Jordan with the baptism of Jesus….And so it was that Jesus was publicly proclaimed rabbi and Messiah in this place where the promise of his coming had been proclaimed” (41).

One more, from “The Problem with Pilate’s Quarters”:

This palace of Herod the Great, the one who had tried to kill Jesus as a child, became the setting for the trial that led to Jesus’s execution as an adult” (164).

The book has eight parts, each of which consists of about ten two-page sections:

I cannot list all of the sections in each part (but Amazon will let you look inside), but in “Jesus in the World of the Gentiles” you’ll find:

There is a lot to like about this book, including the easy-to-follow format, the scholarly research, and the high regard for Scripture.  This is not a book to buy to sit on your shelf, but it’s one that you’ll want to read through from cover to cover.  The lavish illustrations and the two-page sections make it a very easy work to pick up and read when you have a few extra minutes.  I recommend it to all who believe that history, geography, and archaeology can better help us to understand the Bible.  At only $20, it would make a great Christmas gift for a friend, pastor, or teacher.

One thought on “Recommended: A Visual Guide to Gospel Events”