American Colony in Jerusalem Collection at the LOC

Readers here are likely familiar with the American Colony in Jerusalem, a “a non-denominational utopian Christian community founded by a small group of American expatriates in Ottoman Palestine in 1881.”  Their photographic enterprise was a thriving industry serving tourists for the first half of the 20th century.  The original glass negatives were donated by the heir of the collection to the Library of Congress in the 1970s and the digitized versions were posted online about five years ago.  That formed the basis of a series of specialized collections that we created here.

Last week the Library of Congress announced the online publication of a new collection of historic documents from the American Colony.

The materials presented in the new American Memory site were donated to the Library in December 2004 by Valentine Vester and the board of directors of the American Colony of Jerusalem, Ltd. The bulk of the collection—received by the Library between 2005 and the present—comprises more than 10,000 items and is housed in the Library’s Manuscript Division.

Many of these items were collected by Bertha Spafford Vester as she wrote her memoir Our Jerusalem: An American Family in the Holy City. The digitized version includes a selection of the full collection, namely that which was displayed in a 2005 Library of Congress exhibition. The full press release is here.  The full collection is described as follows: 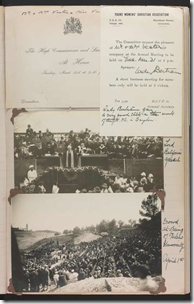 The physical collection focuses on the personal and business life of the colony from the waning years of the Ottoman Empire, through World War I and the British Mandate, and into the formation of the state of Israel.  It includes draft manuscripts, letters, postcards, telegrams, diaries or journals, scrapbooks, printed materials, photographs, hand-drawn maps and ephemera. Most collection items are in English, with some material in Arabic, Hebrew, Turkish, and Swedish.
Items in the collection begin in 1786 and date to 2006. The bulk of the materials date from 1870 to 1968.  Included are items related to the leadership of the colony by members of the Spafford, Vester, and Whiting families.  There is information as well pertaining to the colony’s Swedish members and other residents, as well as neighbors, friends, diplomats, dignitaries, associates in Jerusalem and sponsors in the United States.

This is akin to finding an old chest in the attic full of precious heirlooms, except that in this case there are many such chests and they are available to anyone with a computer.  I look forward to rummaging through this treasure trove of fascinating information about some momentous years in the history of the holy land.

The doorway to the attic is here, and the browse and search features will get you where you want to go quickly.  You can read more about the collection and its origin here.  The catalog record is here.

2 thoughts on “American Colony in Jerusalem Collection at the LOC”