Over the last 60 years there has been some debate concerning the function of the “oldest building in the world” at Jericho (i.e. the Neolithic tower at Jericho/Tell es Sultan).  The Neolithic tower is well-known to visitor’s of Jericho, but its function as a structure has befuddled archaeologists. Amihai Mazar best sums up the various views like this,

“The walls and tower of PPNA (Pre-Pottery Neolithic A) Jericho are a most surprising discovery from a period when almost no public architecture is known elsewhere.  They were explained by Kenyon as a fortification system, and they led her to define Jericho as the earliest urban community known.  An alternative suggestion, offered by O. Bar-Yosef, is that the massive walls were intended to protect the settlement from the thrust of silt and eroded debris from the wadi to the west.  The round tower remains unexplained by this theory, but it could not have had a defensive purpose due to its location on the inner side of the wall.  Perhaps it had some ritual function.”* 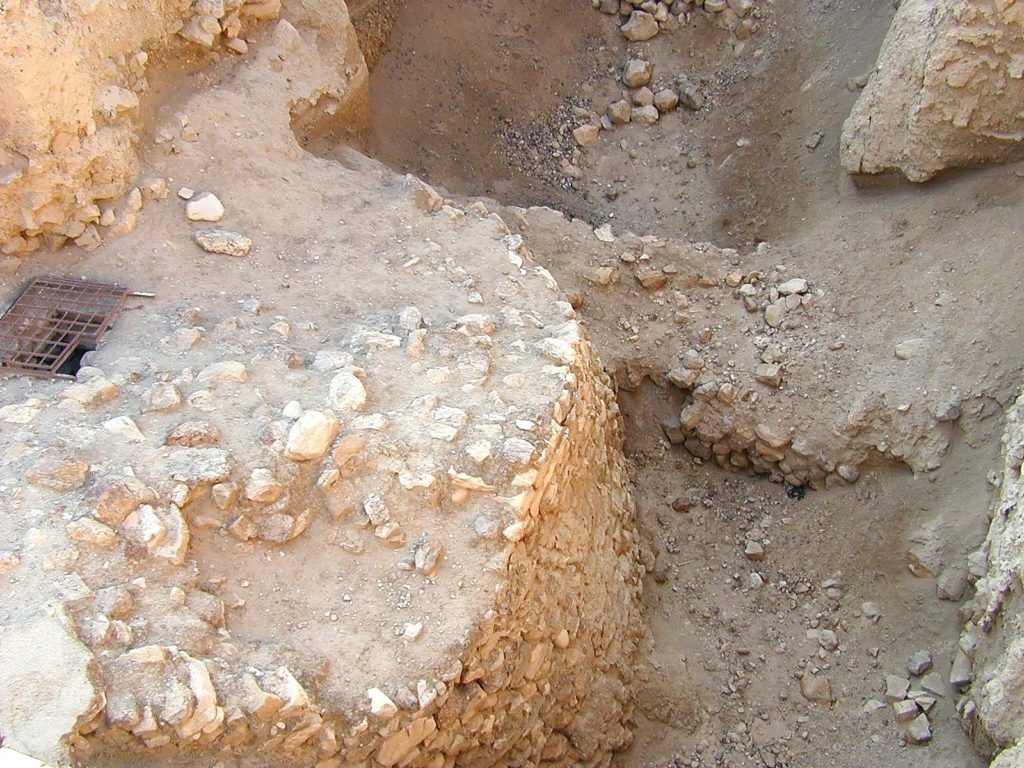 Enter “worker intimidation” to the list of potential explanations.   Arieh O’Sullivan disseminates the theory of Ran Barkai and Roy Liran at The Media Line.

The world’s first skyscraper was built by early farmers, who were frightened into erecting a solar marker by mankind’s early bosses, archaeologists say.

Long before its Biblical walls came tumbling down, Jericho’s residents were being enticed to give up hunting and gathering and start farming for a living. They settled in this oasis next to the Jordan River and built a mysterious 8.5-meter (28-foot) stone tower on the edge of town.

When discovered by archaeologists in 1952, it was dated at over 11,000 years old, making it the first and oldest public building even found. But its purpose and the motivation for erecting it has been debated ever since.

Now, using computer technology, Israeli archaeologists are saying it was built to mark the summer solstice and as a symbol that would entice people to abandon their nomadic ways and settle down.

“The tower was constructed by a major building effort. People were working for a very long time and very hard. It was not like the other domestic buildings in Jericho,” said Ran Barkai of the Department of Archaeology at Tel Aviv University, who was part of a team that did the computer analysis.

Barkai and fellow archaeologist Roy Liran used computers to reconstruct sunsets and found that when the tower was built the nearby mountains cast a shadow on it as the sun set on the longest day of the year. The shadow fell exactly on the structure and then spread out to cover the entire village.

*Quote taken from Mazar, Amihai. Archaeology of the Land of the Bible. New York: Doubleday, 1992.

One thought on “Jericho’s Neolithic “Skyscraper””