Princeton University Press has released a new, single-volume edition of The Ancient Near East: An Anthology of Texts and Pictures, edited by James B. Pritchard. It is available in hardback ($81 at Amazon) or paperback ($26 at Amazon). 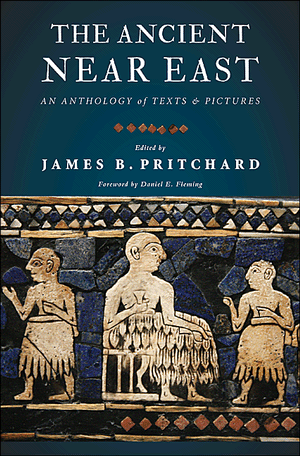 With more than 130 reading selections and 300 photographs of ancient art, architecture, and artifacts, this volume provides a stimulating introduction to some of the most significant and widely studied texts of the ancient Near East, including the Epic of Gilgamesh, the Creation Epic (Enuma elish), the Code of Hammurabi, and the Baal Cycle. For students of history, religion, the Bible, archaeology, and anthropology, this anthology provides a wealth of material for understanding the ancient Near East. (publisher’s website)

When we heard about this, we thought there might be a few questions.

Q: What’s the difference between this and ANET?

A: ANET is short for Ancient Near Eastern Texts Relating to the Old Testament. It was also edited by J. Pritchard, but it is larger and contains more texts. The first edition of ANET was published in 1950, the second edition in 1955, and the third edition in 1969.

This new Princeton edition has combined and reformatted the material of these two abridged anthologies. From our perusal of chapter one in Amazon’s “Look Inside!” it appears almost nothing has changed, including even footnotes and cross-references to ANET and the Bible. The differences between this new volume and ANET are: (1) ANET and ANEP contain more translated texts and pictures, (2) they cost a lot more, and (3) the layout of this new anthology will make it easier to find what you are looking for.

Q: Where can I find more information about this?

A: The Princeton University Press page includes the table of contents and a pdf of chapter one, which is John Wilson’s translations of “Egyptian Myths and Tales.” You can also read portions at Amazon and at Google Books.