The Temple Altar and the Dome of the Chain

Construction work in the Dome of the Chain on the Temple Mount gets attention from Arutz-7.

Muslim religious authorities are concluding a clandestine eight-month dig on the Temple Mount that is intended to erase traces of the Jewish Temple’s Altar, Temple activists charge.
The digs have been taking place under the Dome of the Chain, believed to have been built over 1300 years ago. For eight months, the dome – which has a diameter of 14 meters – has been surrounded by a metal fence and black cloth, which hide whatever activity has been going on there from outside inspection. The Muslim Waqf religious authority has claimed the activity is simply a refurbishing of the structure, but refuses adamantly to let Jews or tourists near.

The article includes a couple of additional brief paragraphs along with five photographs.  Several months ago a reader wrote to me about this activity and I replied with speculation that the work consisted of no more than the repair of tiles.  That seems to be confirmed by the photographs.  It’s unfortunate that the Muslims are so secretive, as such only contributes to the suspicion that they are damaging Jewish antiquities.  On the other hand, the charge that the Muslims’ intent is to erase traces of the Temple’s altar is not supported by evidence and seems intended to stir up animosity.

I have located my response mentioned above and am including a portion of it here:


Why was it necessary even to build the plastic construction for a 2nd time so that even the “half cm’s” openings would be closed?

They do the same thing on many Jewish excavations in Jerusalem.  Everyone is just so sensitive.  It doesn’t have to be a problem, just the thought of a problem.  Given the dust-up a couple of years ago with the digging of a trench for a water pipe, I’m not surprised they take every precaution, even if it’s just to replace a few tiles (which is what I bet it is).


Why aren’t we allowed to have a look at least?

Because you might be a biased journalist and write some half-cocked story.  No one is safe from journalists.


What is there to get angry about if I want to take a picture of an open door and a floor with tiles?


Are they digging under the Dome of the Rock?

Certainly not.  The Dome of the Rock is built on bedrock.  If they wanted to dig under the Dome, they’d do it from inside.  It’s possible they could be accessing some underground cavities (cisterns), but I’d really be surprised if they were doing more than superficial repairs.


How is it possible that Israel cannot go on with their openly work on the ramp to the Mughrabi gate outside the Temple compound, and nobody worries about  secret ‘works’ near the Rock itself? What are they ruining there that we are not allowed to see?

This question seems to suggest that you believe that Middle Eastern matters are treated fairly in the court of world opinion.  That’s as far from the truth as could be.  Why aren’t the Israelis doing something?  My guess is that the cost isn’t worth the gain.  Why cause a fuss over something relatively insignificant that you’re not going to win anyway?

Finally, Leen Ritmeyer explains why he believes that the altar was not located under the Dome of the Chain.  His illustrations will help you put it all together. 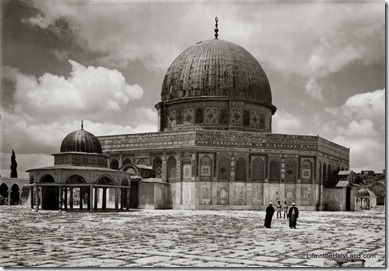 Dome of the Rock with smaller Dome of the Chain (left) in the 1930s (Source)
Share: