Every discipline has its champion, its most famous pioneer, the person whom most everybody identifies as being the embodiment of a particular area of study – for the discipline of Historical Geography that person is Edward Robinson.  Robinson, the great explorer and geographer is credited with identifying over 1,000 ancient places names through his knowledge of ancient Near Eastern history and linguistics and his revolutionary usage of toponomy.  However, Edward Robinson was not the only great explorer living in the mid-1800s – there were a few men of great standing, who along with Robinson helped build the foundation of ancient Near Eastern studies for today’s scholarship.  One of those men of great standing was Titus Tobler. 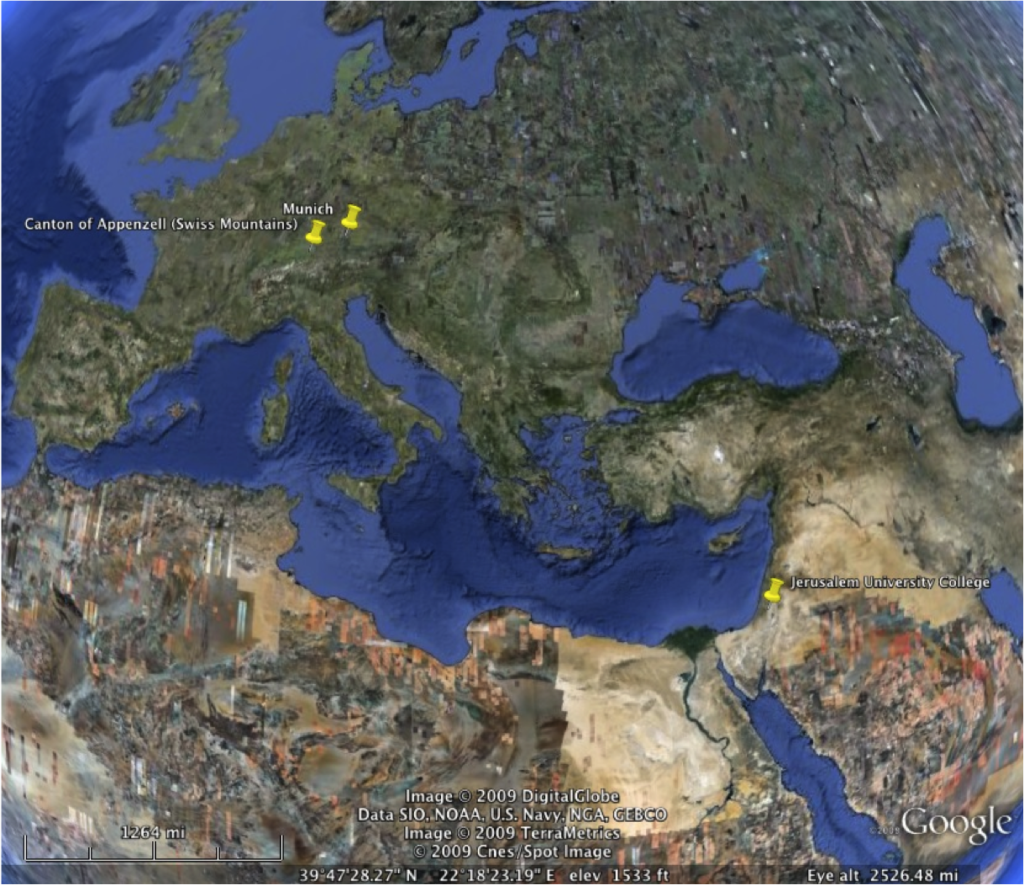 Known affectionately as the “Father of German Exploration in Palestine,”[1] Titus Tobler (1806-1877), Swiss doctor and 19th century Palestine explorer, was an important figure during the mid-19th century explorations of the Holy Land.


Over the course of his career Tobler made four expeditions to the Holy Land (1835, 1845, 1857, and 1865) – these expeditions were mostly directed at Jerusalem and its environs.  Tobler came to Palestine the first time as a 29 year-old physician who had just begun to practice medicine in the mountains of Canton of Appenzell [2]  Ten years later, Dr. Tobler returned to the Holy Land and accomplished one of the most in-depth, analytical studies of the region of Judea up until that time.  This expedition had such a positive impact in mid-19th century scholarship that Tobler is considered by historians to be the most important explorer of Jerusalem in the 1840s.[3]  Tobler’s personage and career are thought to be on par with the renowned Edward Robinson by researchers of the 19th century explorers of Palestine.[4]  Tobler was a highly respected explorer and diligently worked on publishing his explorations and translating ancient pilgrim documents up until his death in 1877.[5]

Titus Tobler’s Holy Land expeditions and subsequent publications were contemporaneous with other better-known 19th century explorers such as the aforementioned Edward Robinson and the Survey of Western Palestine’s C.R. Conder and H.H. Kitchener.  At first Tobler was dejected at the seemingly overcrowded group of scholars surveying, analyzing, and excavating the Levant in the 19th century.  Despite this, Tobler was able to find his own niche within the broader framework of ancient Levantine studies by combining his own considerable knowledge and research with the concepts and publications of his contemporaries.[6]  Tobler was one of the first to realize that there was no lack of problems to solve in Levantine research.  Tobler concerned himself with more than the general scope of biblical studies and site identification – he began to study “the customs and manners of the people, the nature of the soil and climate, and many other things.”[7] In examining and categorizing these subjects Tobler introduced two scholarly tools into the Holy Land studies: the monograph and the bibliography.[8]
Notable Discoveries

Wilson’s Arch – The 19th century explorer is most well known for discovering and suggesting the function of an arch from the Herodian Temple Mount to the Western Hill of Jerusalem.  Today this arch is known as “Wilson’s Arch” after Charles Wilson who published it, but Wilson would not have known about the arch unless Tobler had showed it to him.[9]

The “First Wall” inside of Bishop Gobat’s School (modern day Jerusalem University College) – Tobler correctly identified the remains of Josephus’ “First Wall”[10] that runs along the rocky cliffs of the southwestern part of the Western Hill above the Hinnom Valley.

Ben-Arieh shows Tobler’s perspective of other scholars as he quotes Tobler as saying, “Rivalry between explorers increases knowledge.”[11]


Tobler’s methodology and work ethic was summed up by Johannes Nepomuk Sepp (1816-1909)[13] as follows:
“A welcome incident brought me to meet Dr. Titus Tobler.  I still remember vividly the first meeting, after which we, without knowing each other, went to sleep for some hours after the celebration of the Nativity in the vault of the monastery in Bethlehem, beside a murderer running away from Egypt.  I knelt before the altar of Christ’s birth full of emotions I had never felt before, as a man to my left started measuring the steps with a measuring cord and a folding measure: one could think that he wanted to make sure that until his next visit the Holy Grotto would not be replaced: this was Tobler.  We both thought that we were opposite characters and suited to complement each other conscientiously; anyhow we considered ourselves to be an opening a new chapter in the history of Palestine pilgrims, I applauded with the fullest appreciation his extreme thoroughness; only a German can work as diligently as he…Never were greater scientific results achieved for smaller financial expense as by Tobler, who is suited to the task by his tough perseverance and effort.” [14]
Regarding the importance of Tobler’s life work Benzinger writes the following, “To this very day he who desires to concern himself with the history of these places must begin with Tobler’s investigations.”[15]
With reference to Tobler’s bibliography Gage writes, “Tobler is the first living authority, so far as the literature of Palestine is concerned; and no man has gone through more painstaking efforts than he, to extend the area of our knowledge respecting the Holy Land.”[16]
Hilprecht discusses the nature of Tobler’s bibliography as he records,
“Besides what he observed and found in the land itself, we must not forget what he accomplished at home in investigating the old descriptions of travels. One of his favorite wishes was to publish all descriptions of travels from the third to the fifteenth century in the most carefully edited form possible. This project he could, however, carry out only in a fragmentary way, and mostly at his own expense.  His excellent annotations made a number of the old writings for the first time really serviceable.”[17]