The weekend magazine of Haaretz has a lengthy article on the excavations below ground in Jerusalem.  While the majority of the information is not new, the article brings matters together in a helpful survey.  The second half of the article focuses on the excavations of the road and drainage channel that runs from the Western Wall to the Pool of Siloam.

The excavation of the sewage canal that links the City of David with the Western Wall began in 2003. In many respects, this tunnel became Elad’s flagship project. If, as Elad officials hope, the public can walk the length of the tunnel, it would give the national park a major boost, connecting it directly to the Western Wall plaza. The excavators say this is not an excavation in the ordinary sense, but rather a matter of “clearing” sewage from a Herodian tunnel that was largely exposed by Warren and his successors.

The excavation is criticized on political grounds as well as on archaeological ones.

The scholarly objection to digging laterally through the tunnels is that this is a faulty, unscientific way of excavating, one that typified archaeology a century or more ago; it makes it impossible to find, date and document all the archaeological findings. Another objection concerns the fact that most of the excavations are cautiously retracing the steps of Warren and his successors, meaning they are providing only marginal added value. Critics also say the tunnels conceal the excavation from the public.

Archaeologist Ronny Reich is given a chance to respond:

Reich himself wrote in an introductory archaeology textbook that the tunnel excavation method is outdated. Nevertheless, he rejects the criticism of his work in the City of David. One must differentiate between genuine archaeological excavations and clearing out debris from an ancient sewer, he says. This is not a vertical excavation, but rather the uncovering of an ancient structure. As for vertical excavations, such as the stepped street – the street that was built above the sewer system, now cleared and part of the City of David national park – Reich explains that given the choice between what he gave up by adopting this type of excavation style, and what he discovered by virtue of employing the method, he has no doubt that the excavation was highly valuable.
[…]
“I’m not motivated by politics; I myself am on the left. I’m motivated by the archaeological understanding of Jerusalem. The excavation is sponsored by the State of Israel. What can I do if it is easy to raise funds for excavations in Jerusalem?”
Reich is also proud of his part in encouraging tourism in the area. “When we started, 15 years ago, there may have been a thousand tourists a year. Now there are 450,000 and that is solely because of the archaeology. There is nothing else. So what am I being accused of, helping develop tourism in Jerusalem?”

It’s worth noting that Reich is a political leftist.  This contradicts the earlier statement in the article by Meretz city council member Meir Margalit.

I have no problem with excavating per se; I myself am an archaeology buff, and I always get a thrill from these tunnels. The problem is the excavators’ messianic political agenda.

Margalit’s statement should not go unchallenged.  The fact is that Elad, who is supporting the excavations financially, is ideologically driven, but the archaeologists are not.  There have been many pieces criticizing the excavations, but not once have I heard any hint that Reich or his partner Shukron distort their findings or interpretation because of personal or institutional bias.

The article concludes with a statement from Elad, financial backer of the City of David excavations.

“Recently a drainage canal from the Second Temple period was exposed. This is one of the most important and exciting archaeological discoveries of recent years, not only for the Jewish people but for all of human civilization. It is clear to every thinking person that the route of the canal was determined 2,000 years ago, and there is no connection between its discovery and attempts to connect it, indecently, to political viewpoints.” 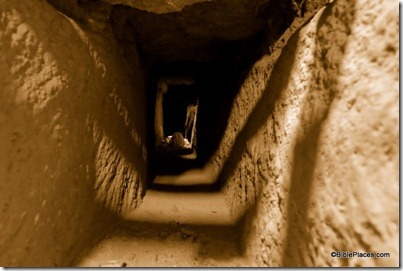 PrevPreviousTop Tourist Sites in Israel in 2010
NextThe Fires of Gehenna: Views of ScholarsNext