The following is an updated version of last year’s list of excavation blogs. If you know of any additional blogs, please send them along and we’ll add them to this list.

Ashkelon – this is a primarily an educational blog written by one of the supervisors.  The season began June 5 and wraps up on July 15.

Bethsaida – the 25th season wraps up this weekend (May 22 to June 25), but no additional updates will be added to the site this year. New photos will be posted on the excavation’s Facebook page.

Tel Burna – the summer season is underway (June 12-30) and the directors are posting weekly roundups and photos. The archaeologists working here believe that their site is biblical Libnah.

Gath – this continues to be the best excavation blog I know of, thanks to the tireless work of the archaeologist, Aren Maeir.  This year they are excavating July 3-29, but Maeir updates the blog year-round.


Gezer – the Southwestern Baptist Theological Seminary excavation deserves a blog. The anonymous assistant professor who blogs at The Biblical World is working in the excavation (June 13 to July 15) and he is posting regularly about everything but archaeology. Aren Maeir lectured to the crew on
Monday; perhaps they’ll learn from his excellent example.


Tall el-Hammam – the official website provides season summaries, but there appears to be no blog updating readers during the winter excavation seasons (upcoming: January 12 to February 23, 2012). Interested parties may wish to contact the leadership in order to receive periodic email updates.


Hazor – excavations began this week (June 19 – July 29), but I am unaware of any blogging about the excavations. The official Tel Hazor Facebook page is rather limited, but perhaps the volunteers will create a Facebook page as they did last year.


Hippos (Susita) – the website indicates that the 2011 season will run July 3-30.  Mark Schuler has a blog for the Concordia University excavations of the Northeast Insula Project.  Other members of the team have blogs listed at virtualdig.org.


Tell Huqoq – excavations began at this Galilean site under the leadership of Jodi Magness. Volunteer Brad Erickson is posting regular entries about his experience and weekend travels.

Tall Jalul – this year’s excavation concluded last week (June 17), but Owen Chesnut may add updates periodically throughout the year.  Though not as well known, this site is one of the largest in Jordan.

Kabri – this is a new blog for the excavations running from June 19 to July 28. To this point five days of photos have been posted and a volunteer has described her experience without resorting to use of the shift key.

Magdala – this year-round excavation may be on a break right now, to judge from the lack of recent blog entries. Universidad Anáhuac México Sur has a new website for the project (in Spanish). You can also follow along by Twitter @magdalaisrael.


Khirbet el-Maqatir – the two-week season ended June 3.  Dig summaries were posted at the blog of the sponsoring organization, the Associates for Biblical Research.

Excavations have been conducted, as Volunteer JJ proves with his onsite fashion photos. A note at this blog suggests the season ended on Friday, with the desired finds found in the balk during clean-up.


Khirbet Qeiyafa – the Elah Fortress website, with all of its photos and summaries, has been deleted.

The Hebrew University website is infrequently updated.  The excavation season this year is June 12 to July 22.  Blogger Luke Chandler is volunteering in July and may have some reports in the weeks to come.

Khirbet Summeily – excavations began this week as part of the Tell el-Hesi Joint Archaeological Project, but no field updates are yet available. Volunteer Jared Wilson has a blog in place.

In addition to the standard blogs and new sources (for major discoveries), a couple of radio
programs are available online to keep you up to date with interviews with the archaeologists.  These include the The Book and the Spade (Gordon Govier) and LandMinds (Barnea Levi Selavan and Dovid Willner). 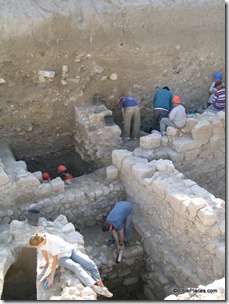 One thought on “2011 Excavation Blogs”