Some summer excavations in Israel have already begun, and many more will commence within the next month.  Five excavations began yesterday or today: Tel Burna, Kefar HaHoresh, Khirbet Qeiyafa, Wadi Hamam, and Tel Gezer.

Three more excavations hit the field next week: Tel Hazor, Tel Kabri, and Khirbet Summeily.  Those beginning in late June or early July include: Tel Dor, Tel Megiddo East, Tell es-Safi (Gath), Tel Akko, and Hippos-Sussita.  Two teams wait until the heat of the summer before getting underway, but both are located next to the beach: Yavneh-Yam and Apollonia-Arsuf.

If you want to volunteer for a dig but cannot participate in the summer or for a lengthy duration, you might consider two year-round operations: Temple Mount Sifting Project and the Dig-for-a-Day program at Maresha (Bet Guvrin).

Last year we published a list of blogs reporting from the excavations and we may prepare another one for this year.  (Any tips on such blogs are appreciated.)

The following list is organized chronologically and based upon dates given at the Find a Dig site, published by the Biblical Archaeology Society.


2011 Excavations Not Yet Begun

Long-running excavations not in the field this year include Megiddo, Tel Rehov, and Dan. 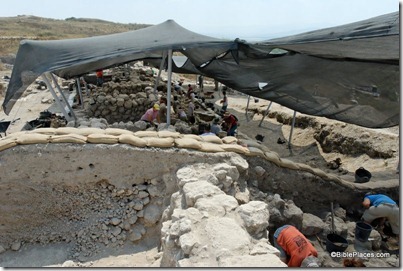