All quotations are from the official press release (also here) of the Israel Antiquities Authority, not from some journalist untrained in the field.

Who built the Temple Mount walls? Every tour guide and every student grounded in the history of Jerusalem will immediately reply that it was Herod.

This might be true. When asked a simple question, a tour guide may respond with a simple answer.

However, in the archaeological excavations alongside the ancient drainage channel of Jerusalem a very old ritual bath (miqwe) was recently discovered that challenges the conventional archaeological perception which regards Herod as being solely responsible for its construction.

Ah, but now they’ve twisted the question so as to create a dramatic discovery. The question asked every tour guide above was not who was solely responsible for its construction. Actually, every tour guide and student knows that Josephus reported that in AD 64 work was halted on the Temple Mount and 18,000 workers were laid off (Ant. 20:219-23).

In fact, the press release acknowledges as much, in the concluding (and bolded) paragraph:

This dramatic find confirms Josephus’ descriptions which state that it was only during the reign of King Agrippa II (Herod’s great-grandson) that the work was finished, and upon its completion there were eight to ten thousand unemployed in Jerusalem.

So if this find confirms Josephus’ descriptions, how does it “challenge the conventional viewpoint”?

The fact is that it doesn’t.

Furthermore, the press release fails to note that the New Testament makes it clear that the Temple Mount construction was on-going during the time of Jesus’ ministry (ca. AD 30).

John 2:20 (NET) “Then the Jewish leaders said to him, ‘This temple has been under construction for forty-six years, and are you going to raise it up in three days?’”

The conventional viewpoint is that construction on the Temple Mount began in 20 BC and continued, likely with some stops and starts, until AD 64.

There is valuable information gained from the recent excavation that is nearly obscured by the pathetic attempt to garner headlines with inaccurate reporting. The excavations of Shukron and Reich demonstrate that construction of Robinson’s Arch and the area in the southwestern corner of the Temple did not begin until AD 17/18. This spectacular staircase may have been freshly completed when Jesus arrived with his disciples. So if the story corrects an interpretation for guides and students of the Temple Mount, it is that King Herod, who died in 4 BC, never entered the complex by means of the southwestern gate.

The press release, with inline photos, can be read at the Israel MFA site. Two high-resolution photos may be downloaded at the IAA site (temporary link) or with this direct link to the zip file.

The story is reported in the media by the Associated Press, the Jerusalem Post, Arutz-7, and Haaretz.

All of these publications report that the excavations “challenge” what we knew and “confirm” what Josephus says. None of them mention John 2:20.

Leen Ritmeyer provides photos including a portion of a well-known unfinished section and notes that “this late date is not surprising” because of the reference in John 2. 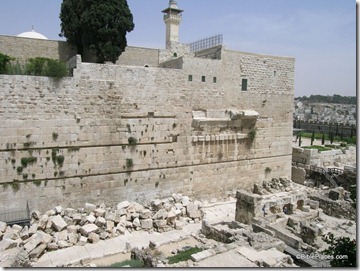 Southwestern corner of the Temple Mount and Robinson’s Arch
Share: