Proposals for Mysterious Marks in City of David

More than 20,000 people have offered suggestions as to the purpose of the mysterious marks recently uncovered by archaeologists in Jerusalem. From the Jerusalem Post:

Last week, Ir David Foundation head archeologist Eli Shukron told reporters he was so puzzled by the shapes – three V’s about 50 cm. long and 5 cm. deep – that he couldn’t begin to guess their function. The figures were found in a room near a spring, an important ritual area for the ancient city.
But Shukron’s bewilderment hasn’t stopped people around the world from offering their conjectures. Among the most interesting ideas: a torture device, drainage for ancient urinals, the original McDonald’s sign, an abbreviation for “veni vidi vici” (Latin for “I came, I saw, I conquered”), a footprint from King Solomon’s pet dinosaur, molds for smelting iron to make tools, the Trinity, a representation of mountains or the symbol for water, signs to the exit, an alien cryptogram, or support for a wooden structure.
Or perhaps, as one reader commented, “3,000 years ago, a worker said to his buddy, ‘I know how to drive archeologists crazy…’” 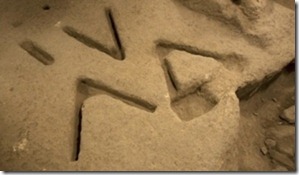 The marks remind me of preparation to cut a board. If these engravings are directly above Hezekiah’s Tunnel (and I don’t know that they are), I’d surmise that the outer arrows mark the edges of the cutting and the middle one marks the center point.

The full story is here. You can read the 20,000 comments and make your own here.

3 thoughts on “Proposals for Mysterious Marks in City of David”