When I taught in Israel, the faculty was split on the question of whether the Promised Land includes territory on the east side of the Jordan River or not. None of us questioned whether or not God had promised to give the land of Canaan on the west side of the Jordan River to Abraham and his descendants, but we could not agree on whether the land given to Reuben, Gad, and half of Manasseh should be considered to be in the Promised Land or not.

Today I will present the affirmative side of the debate. Those who believe in a literal fulfillment of Old Testament prophecies will recognize the potential ramifications of this issue.

4. Numbers 34, which designates the Jordan River as the eastern boundary, in context, must specifically refer to the land that yet remained unconquered in Cisjordan. Note especially Numbers 34:2, 13-15. In this passage Moses clearly states that Reuben, Gad and half of Manasseh already have their inheritance east of the Jordan. The remaining territory, the Land of Canaan, west of the Jordan, was yet to be divided up by lot to the other nine and a half tribes. 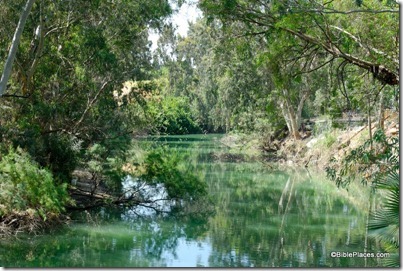 5. Israel could expand the promise to the point that more cities could be added (Deut 19:8-10).

8. A prophecy of the end times speaks of Israel’s presence in Transjordan: The Israelites “will lay hands on Edom and Moab and the Ammonites will be subject to them” (Isa 11:14; cf. Ezek 25:4-14).

The eminent geographer Barry Beitzel is one who holds a view similar to that presented here (The New Moody Atlas of the Bible, 26-29). Tomorrow I will present the arguments for my view.

PrevPreviousYour Take: Dever on Israel’s Emergence
NextThe Promised Land Does Not Include TransjordanNext