Khirbet Qeiyafa at the Time of David

A preliminary report for the fourth and fifth seasons (2010-2011) at Khirbet Qeiyafa has been published by Hadashot Arkheologiyot. Written by Yossi Garfinkel, Sa‘ar Ganor, and Michael Hasel, the report summarizes the finds in Areas A through E, gives a stratigraphical chart of the six strata (from Late Chalcolithic to Ottoman), and concludes with an assessment of the site in its three major periods. Of most interest to us are the finds from Stratum IV, dated to the late 11th and early 10th centuries. This portion is excerpted below, with emphasis added for those who like to skim.

The lower stratum, from Iron Age IIA, dates to the late eleventh–early tenth centuries BCE. The remains of this settlement, uncovered to date, included two gates, two gate plazas, twenty-eight casemates (twenty complete), ten residential buildings and remains of administrative buildings at the top of the site. Large quantities of artifacts were discovered on the floors of the houses in each area, including hundreds of pottery vessels that can be restored, hundreds of stone objects, dozens of metallic objects and small finds. It is obvious that this stratum was suddenly destroyed. Much evidence was found of ritual activity, including mazzevot, a cultic chamber, models of temples (two of ceramic and one of stone) and a figurine.
The Iron Age city had impressive architectural and material finds:
1. A town plan characteristic of the Kingdom of Judah that is also known from other sites, e.g., Bet Shemesh, Tell en-Nasbeh, Tell Beit Mirsim and Be’er Sheva‘. A casemate wall was built at all of these sites and the city’s houses next to it incorporated the casemates as one of the dwelling’s rooms. This model is not known from any Canaanite, Philistine or Kingdom of Israel site.
2. Massive fortification of the site, including the use of stones that weigh up to eight tons apiece.
3. Two gates. To date, no Iron Age cities with two gates were found in either Israel or Judah.
4. An open space for a gate plaza was left near each gate. In Area C an area was left open parallel to three casemates and in Area D, the area was parallel to four casemates.
5. The city’s houses were contiguous and built very close together.
6. Some 500 jar handles bearing a single finger print, or sometimes two or three, were found. Marking jar handles is characteristic of the Kingdom of Judah and it seems this practice has already begun in the early Iron Age IIA.
7. A profusion of bronze and iron objects were found. The iron objects included three swords, about twenty daggers, arrowheads and two spearheads. The bronze items included an axe, arrowheads, rings and a small bowl.
8. Trade and imported objects. Ashdod ware, which was imported from the coastal plain, was found at the site. Basalt vessels were brought from a distance of more than 100 km and clay juglets from Cyprus and two alabaster vessels from Egypt were discovered.
The excavations at Khirbat Qeiyafa clearly reveal an urban society that existed in Judah already in the late eleventh century BCE. It can no longer be argued that the Kingdom of Judah developed only in the late eighth century BCE or at some other later date.

The full preliminary report, with illustrations, is here. All of this data provides archaeologists with much to evaluate with regard to the 10th-century debate. 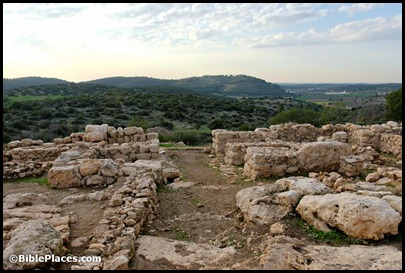 One thought on “Khirbet Qeiyafa at the Time of David”