New Sculpture from Tell Tayinat (and the treaty tablet)

According to an online article at Hürriyet Daily News, excavations at Tell Tayinat unearthed the head of a large statue last month. The Tayinat Archaeological Project is directed by Timothy Harrison of the University of Toronto. The head is made of basalt with inlaid eyes, is about 5 feet tall (1.5 m) and weighs 1.5 tons. Some excerpts give a few details:

“It is a figure with a beard and long hair, and it seems to be holding a weapon…The rest of the sculpture has not been found, indicating that it may
well have been damaged. However, the upper part is in very good
condition…The sculpture has been sent to the Hatay Archeology Museum, where it
will be restored by a professional team…Harrison also showed that
there is writing that says ‘Suppiluliuma’ at the back of the sculpture.” 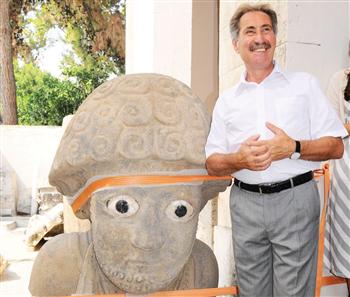 In related news, an Assyrian vassal treaty tablet was discovered at Tell Tayinat in 2009 (see here).

Two articles including the publication of the treaty tablet and a discussion of the archaeological context appear in the latest issue of Journal of Cuneiform Studies (pdf downloads available here).

For a number of years (or rather, decades), Kenneth Kitchen has been working on collecting all Ancient Near Eastern treaties, covenants, and law codes. The culmination of this work now appears in print as:

A detailed table of contents and introduction (pdf) can be downloaded at the publisher’s website. (I am counting on my library to get a copy, since I don’t have quite enough change in my pocket to cover the nearly €300 [= $370] price tag.) The introduction notes that this work includes 106 documents in 10 different languages. Parts 1 and 2 include the texts in transliteration and translation, with notes, indexes and color diagrams. Part 3 is a nearly 300 page commentary and synthesis of all this material. See here for a discussion of the significance of this study for the book of Deuteronomy in particular. (Deuteronomy and other biblical treaties and covenants are included in Treaty, Law and Covenant in the Ancient Near East, but the new Tayinat treaty tablet is not—it is probably too recent to have made it in.)

UPDATE (Jul 30, Mon): An official announcement concerning the new statue fragment was released this morning by the University of Toronto. It includes two more photos and states that the fragment was found underneath the paved surface of a monumental gateway leading to the Neo-Hittite citadel.

The head and torso of the human figure, intact to just above its waist,
stands approximately 1.5 metres in height, suggesting a total body
length of 3.5 to four metres. The figure’s face is bearded, with
beautifully preserved inlaid eyes made of white and black stone, and its
hair has been coiffed in an elaborate series of curls aligned in linear
rows. Both arms are extended forward from the elbow, each with two arm
bracelets decorated with lion heads. The figure’s right hand holds a
spear, and in its left is a shaft of wheat. A crescent-shaped pectoral
adorns its chest. A lengthy Hieroglyphic Luwian inscription, carved in
raised relief across its back, records the campaigns and accomplishments
of Suppiluliuma, likely the same Patinean king who faced a Neo-Assyrian
onslaught of Shalmaneser III as part of a Syrian-Hittite coalition in
858 BC.