More than 5,000 high-resolution images of the Dead Sea Scrolls are now online at www.deadseascrolls.org.il. From the announcement by the Israel Antiquities Authority:

On the occasion of the 65th anniversary of the discovery of the Dead Sea Scrolls, the Israel Antiquities Authority and Google are pleased to launch today the Leon Levy Dead Sea Scrolls Digital Library website, www.deadseascrolls.org.il. The public is invited to experience, view, examine, and explore this collection of over 5000 images of Dead Sea Scrolls, in a quality never seen before.
The library was assembled over the course of two years, in collaboration with Google, using advanced technology first developed by NASA. It includes some 1000 new images of scroll fragments; 3500 scans of negatives from the 1950s; a database documenting about 900 manuscripts, two-thousand years old, comprising thousands of scroll fragments; and interactive content pages. It enables scholars and millions of users worldwide to reveal and decipher details hence invisible to the naked eye. The site displays infra-red and color images at a resolution of 1215 dpi, at a 1:1 scale, equivalent in quality to the original scrolls. Google has provided hosting services and use of Google Maps, image technology and YouTube. The project was made possible by an exceptionally generous grant from the Leon Levy Foundation, and further contribution by the Arcadia Fund, as well as the support of the Yad Hanadiv Foundation.
One of the earliest known texts is a copy of the Book of Deuteronomy, which includes the Ten Commandments; part of chapter 1 of the Book of Genesis, dated to the first century BCE, which describes the creation of the world; a number of copies of Psalms scrolls; tiny texts of tefillin from the Second Temple period; letters and documents hidden by refugees fleeing the Roman army during the Bar Kochba Revolt; and hundreds of additional 2000-year-old texts, shedding light on biblical studies, the history of Judaism and the origins of Christianity.
Shuka Dorfman, Director of the Israel Antiquities Authority, said: “Only five conservators worldwide are authorized to handle the Dead Sea Scrolls. Now, everyone can “touch” the scrolls on-screen around the globe, and view them in spectacular quality, equivalent to the original! On the occasion of the 65th anniversary of their discovery, the IAA, in collaboration with Google, presents the scrolls online, using the most advanced imaging technology. Thus, this most important national treasure is available to the general public, preserving it for future generations.”

This project was first announced in October 2010. Many news stories can be found here. This really is a fantastic resource and I hope they will expand it to include every scroll fragment. 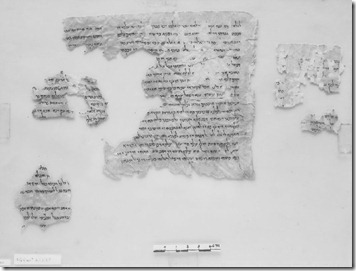