For an introduction to this series see here.
Studium Biblicum Franciscanum Museum at the Church of the Flagellation – Old City Jerusalem, Muslim Quarter

Use the above map to find the Church of the Flagellation (it is near Hadrian’s Arch on the Via Dolorosa). Some nearby sites are Lion’s Gate (Rampart’s walk), the Western Wall Tunnels and the Pools of Bethesda. If you would like to visit the museum in conjunction with a tour of the Old City you might consider stopping at the museum after visiting the Temple Mount (use the northeastern exit near Lion’s Gate) or the Western Wall Tunnels (after exiting the tunnels walk directly across the street to the Church of Flagellation). The SBF museum is just inside the courtyard near the walkway to the bathrooms.

Museum Information and Touring Suggestions
Biblewalks has a nice overview of the Church of the Condemnation/Monastery of the Flagellation’s history. Since our goal is to discuss the museum only we will leave the Church and its (historically problematic) tradition to others.

The SBF museum is by no means a “new” museum as it was originally founded in 1931 (it seems no coincidence that this followed the laying of the foundation of the Rockefeller Museum in 1930). Since then the museum has added to its collection through excavations sponsored by the Studium Biblicum Franciscanum. Some of these excavations include: Bab edh-Drah, Mt. of Olives (including Dominus Flevit), Nazareth, Bethlehem, Herodium, Machaerus, and Capernaum. Recently, the SBF museum has undergone a facelift and its exhibits are a bit more accessible. Their website describes the layout of the museum as follows:

Three rooms were dedicated to the excavations at Nazareth, Capharnaum and Dominus Flevit, respectively. This prominence was due in view of the importance these sites had in commencing a new era of Christian archaeology in the Holy Land, in unraveling the problem of Christian origins, especially the history of the Judaeo-Christian communities of Palestine.

In order of importance the other rooms are subdivided among other excavations made on the Mount of Olives, in the sanctuaries of Jerusalem and its vicinity, in the desert of Judea, in Transjordan, and in two Herodian fortresses Machaerus and Herodion. The purpose is to characterize the SBF collection in such a way as to be correctly perceived as Jerusalem’s archaeological Museum of Christian origins, at the service of scholars and pilgrims who, in ever greater numbers, visit the Holy Land.

In addition to these important collections, the SBF museum has a great collection/display of pottery from the Chalcolithic to Byzantine periods showing the different forms of vessels (e.g. jug) and their development through time. Of special note is their collection of lamps from the Early Bronze Age-Byzantine period—I know of no better location to witness the major shifts in the development of the lamp form. This is a great location to point out the difference between an Iron Age II “lamp unto my feet” (Psalm 119:105) and the kind of Roman lamp that the “ten virgins took…to meet the bridegroom” (Matt. 25:1).

As you might expect from a Catholic School/Monastery in Jerusalem the main thrust of the museum is directed towards Christian Archaeology (first century CE–Byzantine era), but that does not mean that there is not important material from earlier periods. There are some fantastic local Canaanite and imported Cypriot vessels from the Early Bronze-Late Bronze Age that come from the excavations in and around the ancient city of Jebus (cf. 2 Sam. 5). There are also some very nice Egyptian and Hyksos seals in the scriptorium room. For those interested in the early Canaanite period, do check out the back room where there is an exhibit on Bab edh-Dhra (Early Bronze–Intermediate Bronze, ca. 3300–2000 BCE).

For all of its strong points, the SBF museum’s artifacts do lack sufficient labeling for most of its materials. However, this seems to also be changing as they continue their facelift with plans of even adding a multimedia room in the near future.

Conclusion
In conclusion, the SBF museum should not be on your “must see” list whenever you visit Israel, however, if you have an extra half-hour to spend in the Old City it is well worth a visit even for first-time visitors. It is a decent stand-in for the Israel Museum if you don’t have enough time for a visit (although I would recommend the nearby Rockefeller Museum before the SBF). For returnees to the country I would strongly recommend checking out this small museum, as it will both inform visitors on the archaeology on some of Christianity’s most heralded sites, as well as help understand the development of Christian Archaeology in the Holy Land over the last century-and-a-half.

A report of the discovery of an ancient church building at Shiloh struck me as questionable. Because several churches have been discovered at Shiloh in the past (including one in 2006), I wondered if this was a recycled report. You can read the story as reported by Israel HaYom, YourJewishNews, and Algemeiner.

Yisrael Medad, a resident of modern Shiloh, clarifies that the discovery is simply more of the Byzantine basilica excavated by the Danish expedition in the 1920s. The new excavations revealed a destruction layer which may be dated to the time of the Samaritan Revolt in AD 529. Medad’s blog has photos of the new excavations. 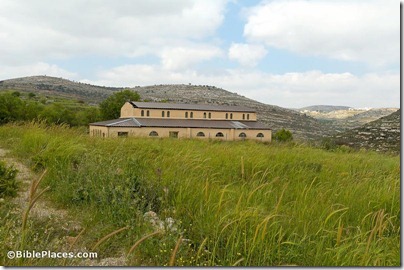 Area of Byzantine basilica of Shiloh with 20th century protective building. Photo from the Pictorial Library of Bible Lands.
Share:
Leave a comment
Search
About the BiblePlaces Blog