Picture of the Week: Ancient Harbor of Susita/Hippos on the Sea of Galilee

In the 1970’s and 1980’s, the remains of several ancient harbors were identified around the Sea of Galilee. At least 13 harbors have been identified, all of which most likely date to the Hellenistic and Roman Periods. A map of the various harbors can be seen here. The work of archaeologists in this area (most notably, the labors of Mendel Nun) have provided us with significant insights into what life was like for fishermen who worked on the Sea of Galilee during these periods.

Our picture of the week comes from Volume 1 of the Pictorial Library of Bible Lands, and shows the remains of the main breakwater of the harbor of Susita (a.k.a., Hippos) on the southeastern shore of the Sea of Galilee. The photo was taken at a time when the water level in the lake was extremely low, so the breakwater stands several meters from the shore. However, in ancient times this breakwater would have provided boats with shelter from dangerous storms that can occur on the lake (for example, see Matt. 8:23-27). 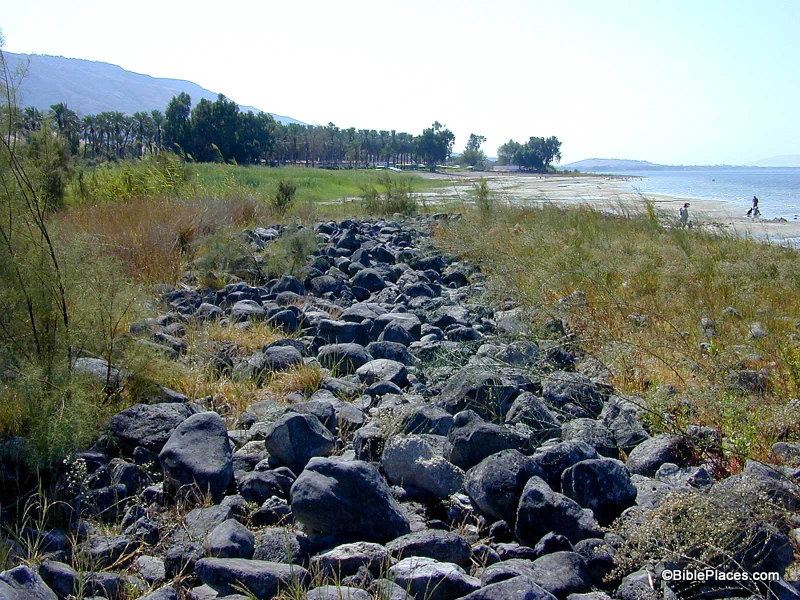 This harbor was a typical one on the Sea of Galilee during this period. The breakwater was man-made and extended from the shore, enclosing an area of about an acre with a gap on the south end for boats to pass in and out.  In the map referenced above, the Hippos harbor can be seen at the bottom right.  Mendel Nun, in his book Ancient Anchorages and Harbours Around the Sea of Galilee (Kibbutz Ein Gev, Israel: Kinnereth Sailing Co., 1988), describes this harbor in the following way:

The harbour of Susita was built to fit the conditions of the sandy shore. The central breakwater is 120 meters long; its base is five to seven meters wide. The stone breakwater projecting from the shore turns to the south and runs nearly parallel to the shore at a depth of -211.25 meters [693 feet below sea level] for another 85 meters.

At the far end it curves sharply to the west and extends into the lake to a depth of -212.5 meters [697 feet below sea level]. This shape makes for a long inner area open to the south; a second breakwater was therefore constructed which extends from the shore for 40 meters. The inner part of the harbour thus formed a closed basin enclosing an area of about an acre. A small jetty leading north from the breakwater was for passengers embarking and disembarking, saving them the tedious procedure of passing through the narrow harbour entrance.  Indications that this entrance was deepended [sic.] may still be seen.

The total lenght [sic.] of all the breakwaters in this harbour comes to 180 meters.  The sides were built of rows of stones, the interstices filled with smaller rocks, re-used building stones, fragments of lime columns. During the past few years of low water, the silt filling the harbour has been overgrown by shrubbery.  (Nun, Ancient Anchorages and Harbours, pp. 13-14.)

Harbors such as this bear witness to the thriving economy around the lake during the time of Christ. Although people have probably always fished in the lake, the Roman Period was a time when fishermen were especially active and an unusually high number of settlements were constructed around the Sea of Galilee. According to Mendel Nun, “all settlements on the shores of the Sea of Galilee, even the smallest, had an anchorage, each built to suit local conditions and requirements.” (Ibid., p. 27.) So harbors such as this would have been part of the everyday life of people living next to the lake. Insights such as this add color to our reading of the stories in the Gospels.