In a presentation last week at the conference on “The History of the Caves of Qumran,” Yonatan Adler reported the discovery of a group of phylacteries (tefillin) containing nine small manuscripts.

These were discovered in Caves 4 and 5 in 1952 but only recently did Adler determine that they contained texts.

The discovery was reported in the Italian press (with a photo) and Joseph Lauer has provided a translation of the article:

LUGANO – The discovery of new Qumran manuscripts was announced during the International Research Seminar on “The History of the Caves of Qumran,” organized by the Institute of Culture and Archaeology of the Biblical Lands of the Faculty of Theology of Lugano (chaired by prof. Dr. George Paximadi).

Working on materials from the archaeological excavations of the ‘50s, archaeologist Yonatan Adler found some intact phylacteries (the boxes – used by religious Jews – which contain small manuscript rolls with a biblical text).

It was possible to detect the manuscripts in them thanks to special photographs (multispectral imaging) carried out by the Israel Antiquities Authority.

The phylacteries are from Qumran caves 4 and 5, excavated in 1952 by the archaeologist Roland de Vaux.

Among the material processed by the Israel Antiquities Authority’s laboratory for the conservation of the scrolls, were three packs containing nine small scrolls manuscripts.

“It does not happen every day to discover new manuscripts. It was really a great feeling,” said Yonatan Adler, Ariel University.

“I am very proud that in our laboratory, using the most advanced technologies, we can reconstruct the history of two thousand years ago,” said Pnina Shor, director of the laboratory for the conservation of the scrolls of the Israel Antiquities Authority.

Lauer has located some related resources:
Drew Longacre’s notice of this and another discovery reported at the seminar.

Adler’s previous lecture on “The Tefillin of Qumran–Archaeology and Halacha.”

A photograph of a previously discovered phylactery. 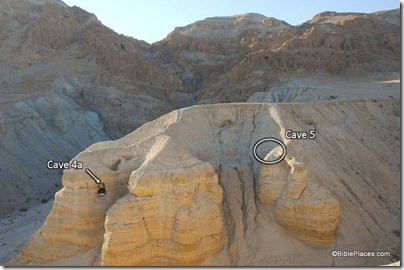 Qumran Caves 4 and 5
Screenshot from Qumran Caves presentation in volume 4 of the Pictorial Library of Bible Lands
Share: