CORONA Atlas of the Middle East

What is CORONA imagery?

During the Cold War, CORONA was a codename for one of the United States’ top-secret satellite missions created to capture high-resolution imagery. The first mission was launched into space in 1960, and the program continued until 1972. The imagery was declassified in 1995, making it available to the public.

What is the value of CORONA imagery?

From the CORONA Atlas of the Middle East:

In regions like the Middle East, CORONA imagery is particularly important for archaeology because urban development, agricultural intensification, and reservoir construction over the past several decades have obscured or destroyed countless archaeological sites and other ancient features such as roads and canals. These sites are often clearly visible on CORONA imagery, enabling researchers to map sites that have been lost and to discover many that have never before been documented.

For example, in 1998, James Hoffmeier and his team were able to locate additional sections of Egypt’s east frontier canal in northern Sinai thanks to CORONA imagery.


What has the University of Arkansas done with the imagery?

First, even though CORONA imagery is in the public domain, there are costs associated with digitization of the original film and acquisition of the files. The University of Arkansas has purchased much of this imagery and made it available for researchers. Second, the University of Arkansas corrected the spatial geometry of the photos for distortion (orthorectification) and has positioned the imagery in real geographic space (georectification). This allows the CORONA Atlas to overlay the CORONA imagery on top of other imagery that is positioned in the same geographic space.

How can the CORONA Atlas of the Middle East be used?

Recently, I was trying to locate the site of Samsat in Turkey. Samsat is believed to be ancient Kummuḫ, capital of a Neo-Hittite kingdom by the same name. (In the Hellenistic period, it was replaced by the kingdom of Commagene.) The problem with finding Samsat today, however, is that it now lies at that bottom of Lake Atatürk Dam. It is very hard to find a tell in a lake. The Atatürk Dam was built on the Euphrates River and was completed in 1990. The reservoir flooded the valley of the Euphrates River and its tributaries, and the lake today covers approximately 320 square miles. The CORONA Atlas of the Middle East allows me to see Samsat (and the Euphrates River) before it was submerged, and to locate it with precision in Google Earth, because you can adjust the transparency of the CORONA imagery. The CORONA atlas also has tools for measuring, obtaining coordinates, and capturing imagery for other uses.

The tell of Samsat is located in the center of the right photograph. Here is a close-up. 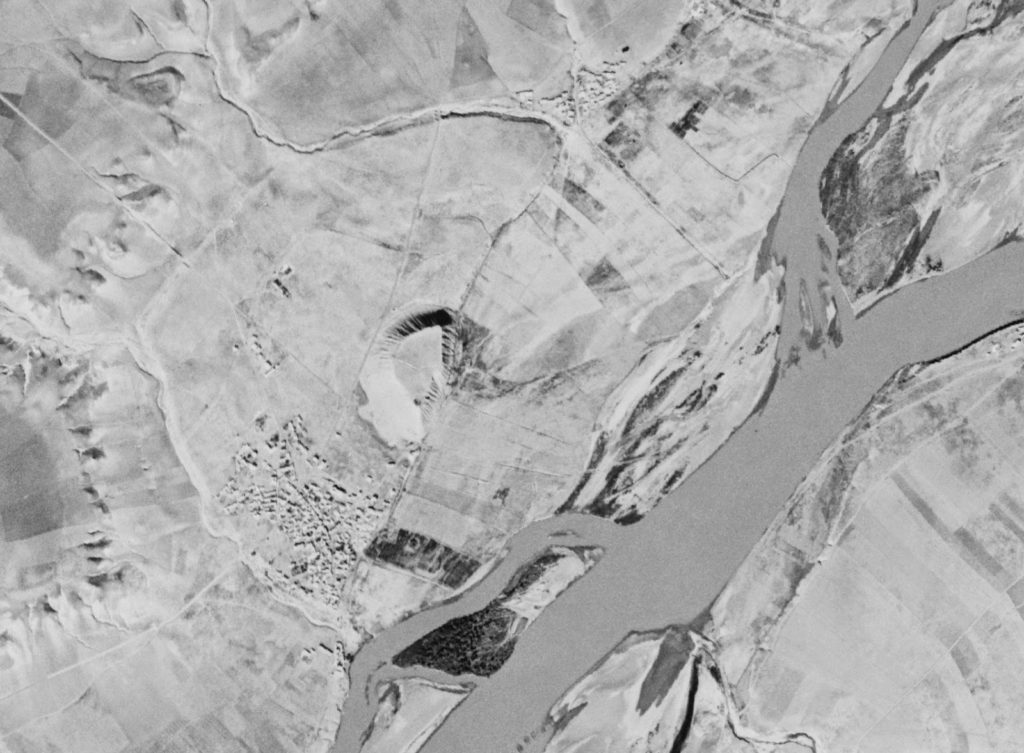 Head on over and poke around. It took my internet service several moments to load imagery, so it may require you to have a little patience.