Visitors to Samaria are few since the Israel’s Nature and Parks Authority closed down daily operations. It is truly sad that most Israelis and foreign tourists can’t (or won’t) visit the ancient capital of the northern kingdom, home to Jehu and Jeroboam, Ahab and Jezebel. The history is of great significance and the views are terrific.

From The Times of Israel, by Ilan Ben Zion:

The manager of the Palestinian Authority’s Interpretation Center at the Sebastia archaeological site handed over a brochure; his colleague, roused from slumber, hastily pulled his pants on. Pointing to a small screening room where visitors would see a movie about the site, he contradicted himself with absolute confidence: “There’s a film — but there’s no film.”
The PA built the facility two years ago to inform visitors about the ancient city of Sebastia after Israel’s Nature and Parks Authority closed down its day-to-day operations at the site. But besides a pamphlet and some hard candies, the Interpretation Center has little to offer. The brand-new plush chairs in the 40-seat theater meant to show were still in their plastic covers. (The PA didn’t respond to inquiries about the cost of the center; the United Nations Millennium Development Fund, a co-funder, donated $132,000.)
“You can learn the history of the whole region (by) staying here because all the powers that crossed the region since the time of the Egyptians were passing through,” Carla Benelli, an art historian working in Sebastia, told AP a few years ago. Sebastia’s tel features remains from 10 different periods, from the Iron Age to modern times. “From this point of view, it’s really very important,”
The entire saga of preserving and showcasing ancient Sebastia unfolds like a comedy of errors which could only occur in the Wild West Bank. Israel controls the park containing the ancient finds, which is in Area C, but does nothing with it. The Palestinians say they want to control it, but lack the resources to develop it. And while both sides lay claim to the site as their exclusive cultural heritage, it lies neglected, underdeveloped, unexcavated.

The full story is here. We have more photos and descriptions here. 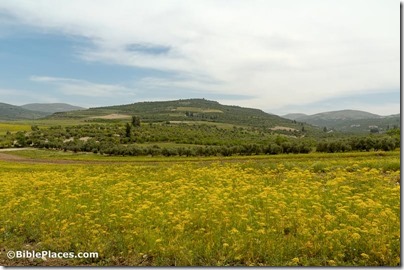 Samaria from the west
Photo from Samaria and the Center
Share:

2 thoughts on “The Neglect of Samaria”