Some scholars have weighed in on the seal of the woman discovered in Jerusalem. Christopher Rollston has a lengthy analysis, concluding in part that the seal dates to approximately 700 BC.

Robert Deutsch writes that the archaeologists made several mistakes, including misreading the name on one of the seals. The Daily Mail has a number of photographs. For some political irony, see The Blaze.

The first phase of the Terra Sancta Museum in Jerusalem (at the Monastery of the Flagellation) opens on March 17.

A schedule of forthcoming lectures for the Anglo-Israel Archaeological Society are online here.

The latest exhibit at the Israel Museum, “Pharaoh in Canaan: The Untold Story,” looks at Egyptian presence in Israel during the Middle and Late Bronze periods. A one-minute video provides a preview.

“Pharaoh: King of Ancient Egypt” opens at the Cleveland Museum of Art on March 13, featuring many pieces from the British Museum.

Many documents from the 18th and 19th centuries have been discovered in a storeroom in Egypt, including letters from Flinders Petrie and Howard Carter.

Luxor is sending 778 artifacts to be displayed in the Grand Egyptian Museum in Cairo.

The Karnak Temple did not catch on fire.

A New York Times reporter describes some of the challenges of being a tourist in Saudi Arabia.

The BBC reports on the impact of the Syrian civil war on the archaeology of Tell Qarqur (Qarqar).

Clyde Billington is on The Book and the Spade this week discussing the harbor of Corinth and the fortress of Macherus.

Many of the early volumes of the Palestine Exploration Fund Quarterly Statement are now online. 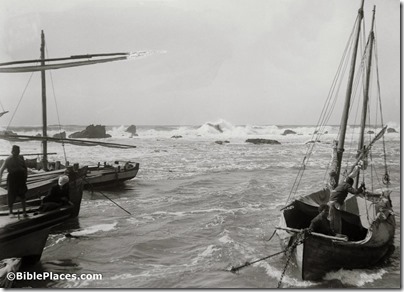 Our most liked photo this week on Facebook was this one of the harbor at Jaffa (biblical Joppa), from the American Colony and Eric Matson Collection.
Share: