Readers of this blog are big fans of the Tel Dan Inscription, taking first place with twice the number of votes for the runner-up, the Siloam Inscription. It dropped off steeply from there with only four votes for the Pilate Inscription, two for the Ketef Hinnom silver amulets, and one each for a number of others. Some respondents explained their choice, so let’s take a look at a few of those.

First recognized mention of David, the kings of Israel and Judah seen as closely related polities, its early date, royal rhetorical devices, claims of divine intervention for the same event which Kings and Chron claim for another deity (still history on both counts!). Plus its early discussion revealed the disparity we call min & maximalism more clearly than ever before.

Can’t beat this one. Any extrabiblical reference has some weighty significance, but to have one connected to King David is beyond remarkable. Truly an amazing discovery.

The irony that proof of David’s house was preserved in the very place Jeroboam tried to compete with it (1 Ki. 12).

My two cents: While many rightly recognize this stele as important because of its mention of the “House of David,” I think that its significance as witness to the Aramean oppression of Israel has too often been overlooked. I addressed this matter in my dissertation. 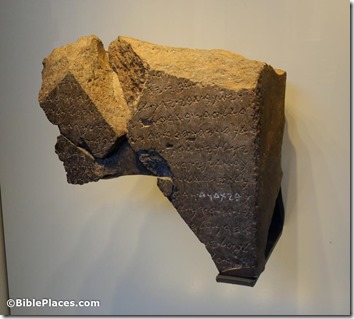 The Tel Dan Inscription, on display in the Israel Museum

You can actually see the thing described in the inscription. Furthermore, the activity of excavating the tunnel was in preparation for an event (Sennacherib’s 3rd campaign of 701 BC) which is documented in archaeological artifacts, destruction layers, Sennacherib’s inscriptions, Sennacherib’s reliefs, the Bible, and more!

The construction of the tunnel in the 8th century BC was an amazing feat–starting from opposite ends and meeting. Whatever may be said about how it was done, I think it was engineered by our great God!

Too few inscriptions are found in situ, and this one is so remarkable in part because there can be no doubt what it is describing, and the fact that this tunnel is mentioned in the Bible (twice!) makes this one of the greatest discoveries in “biblical archaeology.” 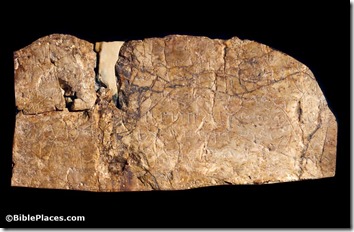 The Siloam Inscription, on display in the Istanbul Archaeological Museum

Because of Pontius Pilate’s relationship to Jesus

This discovery in 1961 provided the first inscriptional evidence for this Roman prefect (and confirmed that he was a prefect and not a procurator). 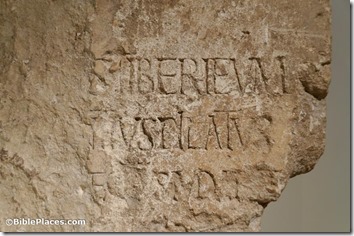 The Pilate inscription, on display in the Israel Museum

Though they didn’t receive as many votes, some others received good support:


The “Shasu of Yahweh” inscription

It is surprising to find that the earliest naming of the Israelite God occurs in an Egyptian inscription from Soleb from the 14th-15th century BC.  As Donald Redford notes, it is “a most precious indication of the whereabouts during the late fifteenth century B.C. of an enclave revering this god.”

How often do we get a new story about a famous biblical character?

Hopeful Jews from the time of Emperor Julian, (4th century AD) allowed back into Aelia Capitolina were hoping to rebuild the Temple.

There were a number of other good suggestions, including:

The one that may be my favorite was not chosen by anyone: the Mesha Stele. Someday I need to make my case for why this is such an outstanding inscription. But for now I’ll note only this: it provides a remarkable witness to the Aramean oppression of Israel!

Thanks for participating and/or reading! This has been enjoyable and we’ll plan to do another survey next Tuesday.