Archaeologists have discovered a well-preserved Roman-period road in the Shephelah of Judah.
Based on a milestone previously discovered with the name of Hadrian, they have dated the road to circa AD 130, though numismatic evidence may indicate a first-century date for the revealed section.
The road was discovered during the process of laying a water pipeline to Jerusalem. 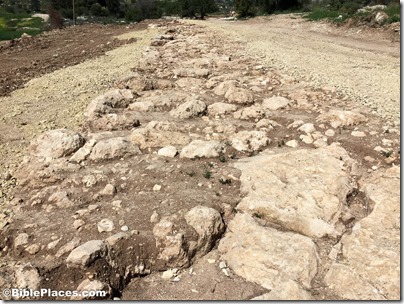 The road is located near the junction of the “Chalk Moat” route running south from Beth Shemesh and the Elah Valley road that runs up into the Judean Hill Country towards Bethlehem and Jerusalem.
On a modern map, the road is near the intersection of Highways 375 and 3855. 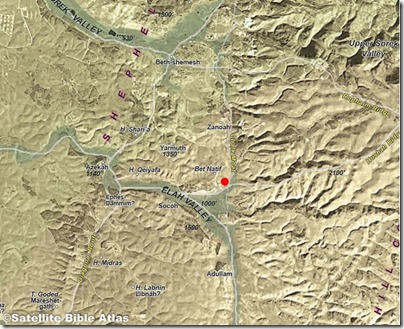 Map from the Satellite Bible Atlas, with red circle identifying location of discovery

The Israel Antiquities Authority has determined that the road is about 20 feet (6 m) wide and one mile (1.6 km) long, but only 150 meters of the road have been exposed and will be preserved for visitors to view. 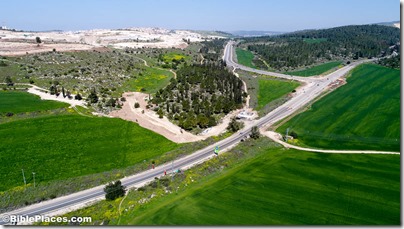 The ancient road was a spur that apparently connected the ruin of Khirbet Beit Natif on the hills north of the Elah Valley with the “Emperor’s Road.” This latter road was constructed in the time of Hadrian and ran from Bet Guvrin (ancient Eleutheropolis) through the Elah Valley near the newly discovered road and then up into the hills along the Hushah ridge. 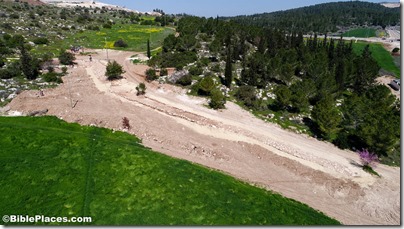 Aerial view of Roman road from the south

Ilan Ben Zion identifies Beit Natif as the first-century site of Bethletepha, “a town sacked by
Vespasian’s army during the First Jewish Revolt, between 66 and 70 CE.”

Coins were discovered between the pavement stones that suggest a first-century date: 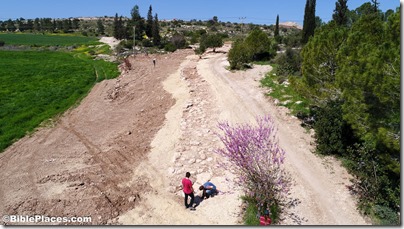 The Roman road (aerial view from the southeast)

All photos in this post were taken earlier today by Bill Schlegel. More photos from the IAA are posted here.

It’s too bad that when they laid a similar water pipeline along the Roman road to Emmaus from Jerusalem that they didn’t take steps to preserve it.

The Edicule of the Holy Sepulcher Unwrapped

For the first time in 70 years, the iron cage around the edicule built over the traditional tomb of Jesus has been removed. The British Mandatory authorities installed the girders as a temporary measure in 1947 while church leaders squabbled over a restoration plan.

Alexander Schick was in the Church of the Holy Sepulcher on Monday and took the photo below.

The renovations are scheduled to be completed in time for Easter next month. The most recent story I see about the restoration is this one by Nir Hasson in Haaretz (premium) last week. 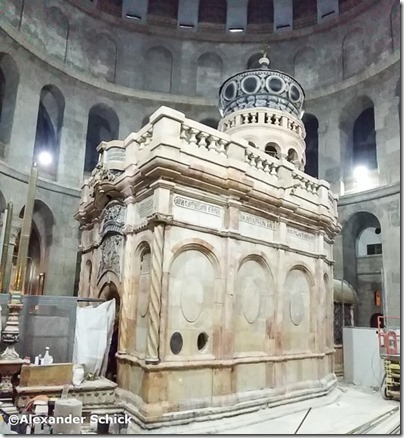 The edicule of the Church of the Holy Sepulcher
Share:
Leave a comment
Search
About the BiblePlaces Blog