Inside the Photo Companion: Cultural Scenes

When we started taking photos in the Holy Land, our gaze was mostly fixed on the sites. That, after all, is the basis for most tour itineraries. This was reflected in our earliest photo collections, as they were organized by country, region, and site.

But as we began thinking about illustrating each verse of the Bible, we knew that we would need much more than photographs of piles of rocks at various sites. In this post we want to draw your attention to some of the many cultural scenes that we have illustrated in the new Gospels volumes of the Photo Companion to the Bible. 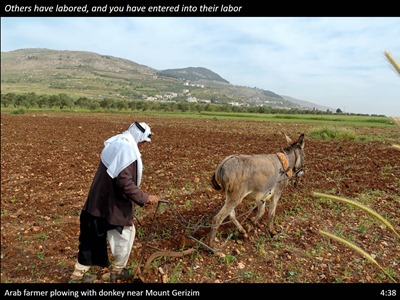 This scene shows a farmer plowing his field with his donkey. We captured this scene one day as we were passing through the Michmethath Valley on the way to Mount Gerizim (visible in the distance).
While certain elements like the headdress differ from the biblical period, we’re still amazed that we can see scenes like this that are so similar to ancient times. 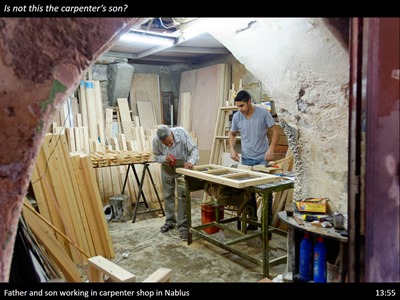 I was walking through the suq (market) in Nablus last year (my first-ever visit there) and I saw through one doorway a father and son working on a carpentry project. This brought to mind another famous pair of father-son carpenters and I snapped a couple of pictures. While this scene too differs from what first-century Nazareth looked like, it’s still helpful to me in imagining how Jesus worked together with Joseph. 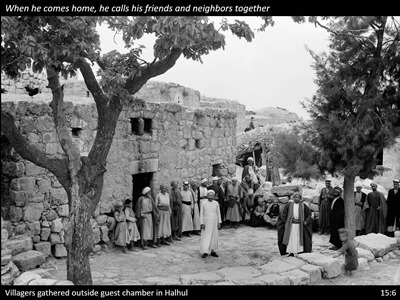 Some scenes are just difficult or impossible to capture today. The scene above was taken by an American Colony photographer in 1940, showing a scene of men gathered in a traditional village.
There are a number of biblical passages this could illustrate, but we’ve used it here to illustrate the story in Luke 15:1-7 where the rejoicing shepherd returns home to tell his neighbors that he has found his lost sheep. 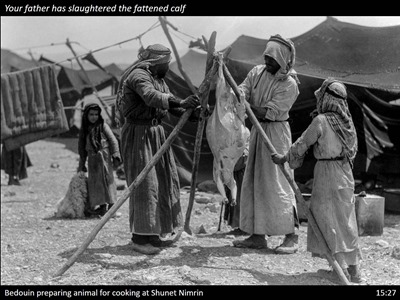 When the prodigal son returned home, his father held a lavish feast, even slaughtering the fattened calf in his son’s honor (Luke 15:27). This American Colony photograph, taken in 1935, shows a group of Bedouin men preparing an animal for the fire. This image will also serve to illustrate other passages, including Abraham’s killing of a choice calf when three “men” came to visit (Gen 18:7). 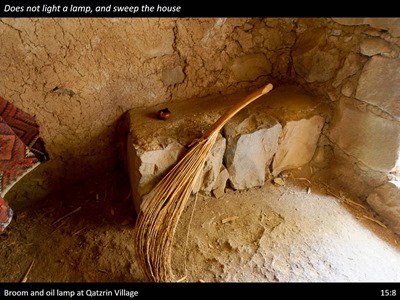 I’ll close with a favorite. I took this picture at the Qatzrin Village in the Golan Heights (a worthwhile stop if you haven’t been). This display illustrates well the verse about the woman who lost one of her coins and in an effort to find it lit an oil lamp and swept the house (Luke 15:8). Many children (and adults) today would be hard pressed to picture what an oil lamp and a broom looked like in the time of Jesus.

It is a lot of fun to photograph these scenes or to find just the right image to illustrate a verse or concept. In creating the Photo Companion to the Bible, we intend to make Scripture not only more understandable but also more engaging and exciting.

One thought on “Inside the Photo Companion: Cultural Scenes”