Inside the Photo Companion to the Bible: The Coins

Today I’m going to begin a short series that provides an inside look at some of the features of the new Photo Companion to the Bible. I think that both those who already own the collection and those who are considering the investment will find these posts helpful.

One of the questions we’ve been asked is whether the Photo Companion to the Bible is just a “remix” of photos included in our other collections. This is a good question, for way back when we conceived this project, we expected it to be primarily a re-arrangement of our images in biblical book, chapter, and verse sequence.

In the years since, however, we’ve significantly expanded our ambitions to include several new categories of photographs. One new group is numismatics, and this is particularly useful in many New Testament books.

Quite a few New Testament rulers minted their own coins, and several are portrayed on those coins.
This provides a closer connection to these individuals than what we may have from photographs of landscapes, cities, and buildings. 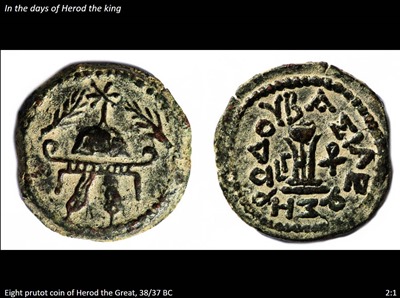 King Herod minted many coins during his 37-year reign, including the coin shown above. This 8-prutot coin has an inscription on the reverse (on right) which reads ΗΡΩΔΟΥ ΒΑΣΙΛΕΩΣ (“of King Herod”), and the date is given as L (“year”) Γ (“3”). Herod’s third year was 38/37 BC. A depiction of a tripod and incense bowl is featured in the center. The obverse side depicts a Macedonian-style helmet wreathed with acanthus leaves with cheek pieces and straps (most likely Herod’s personal helmet), a star above the helmet, and palm branches to the sides. It is noteworthy that unlike some of his descendants, King Herod never depicted himself or another person on his coins probably out of deference for his Jewish subjects. 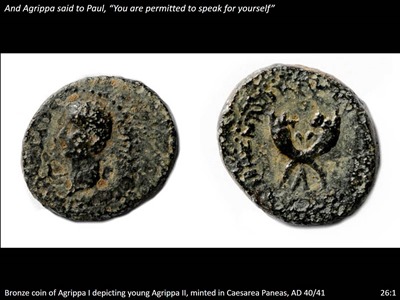 King Herod’s grandson Agrippa I is mentioned in Acts 12. Shortly before he was struck down by God, he minted a coin (above) depicting his young son, Agrippa II. The obverse side of this coin depicts the bare head of a youthful Agrippa II. On either side of the head are the letters L (“year”) and Ε (“5”), i.e., AD 40/41. Agrippa II was about 12 or 13 at this time.

It’s amazing to think that this image shows the same person that Paul would later testify before in Acts 26, declaring that “I pray God that not only you but all who are listening to me today may become what I am, except for these chains” (Acts 26:29).

The inscription around the head is worn, but reads ΑΓΡΙΠΠΑ ΥΙΟΥ ΒΑΣΙΛΕΩΣ ΑΓΡΙΠΠΑ (“of Agrippa, the son of King Agrippa”). The reverse depicts double cornucopias, crossed at the bases, surrounded by the text ΒΑΣ ΑΓΡΙΠΠΑΣ ΦΙΛΟΚΑΙΣΑΡ (“King Agrippa, friend of Caesar”). 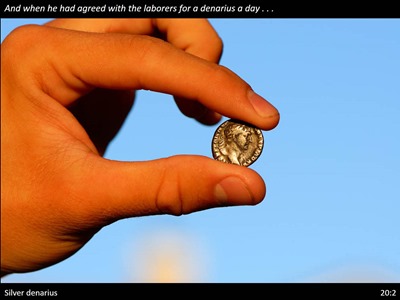 Coins are also mentioned a number of times in the Gospels as an element of daily life. Jesus told a parable about men who agreed to work a day for a denarius (Matt 20:1-16) and another about a woman who lost one of her ten drachmas (Luke 15:8). Peter caught a fish with a four-drachma (shekel) coin in its mouth (Matt 17:27). And after asking his interlocutors to hold up a coin, Jesus taught that his followers should pay taxes to Caesar (Luke 20:23-25).

As much as we are able, we are photographing coins that will provide as complete of a photographic companion to the Bible as possible. The Gospels collection includes dozens of numismatic images from around the world, with a significant number (including the top two shown above) from the Jared James Clark Collection.

The book of Acts (now in development) will benefit greatly from images of coins, as will the seven churches in Revelation. Perhaps the chapter to benefit the most, when we get there, is Daniel 11 with its amazing prophecy of Seleucid and Ptolemaic rulers in the intertestamental period. Many people are not aware of the extensive numismatic evidence and how it contributes to our understanding of the Bible. We hope that the Photo Companion to the Bible will play a part in helping to bridge the gap.

One thought on “Inside the Photo Companion to the Bible: The Coins”

PrevPreviousResources on the Temple and Temple Mount
NextInside the Photo Companion to the Bible: The LabelsNext